When the weather gets cool, I want soup. Daily. There's nothing more comforting and warming than a big, steaming bowl of homemade soup. With really good crusty bread. I mentioned in an earlier post that my husband Brandon sadly does not share my love of soups. But I keep making them. They feed a crowd, they make the apartment smell heavenly, and they provide me with lunches for a week every time I make them. And did I mention that they freeze well? I have so many favorites: Tuscan white bean, hearty lentil with kale, cumin black bean, old-fashioned chicken noodle, roasted tomato, French onion, split pea, and one of my all-time favorites: butternut squash. THIS is the soup that makes me feel like it's fall. And it's the perfect orange soup to whip up over Halloween weekend!

This recipe was inspired by an ultra velvety butternut squash soup I tried last week at a James Beard Foundation dinner prepared by an ultra-talented crew of seven chefs from St. John's, Newfoundland. I was recently in St. John's and was blown away by the culinary talent there, so I was especially excited to attend their event in NYC. The entire dinner was fantastic, with fabulous Newfoundland seafood like seared cod cheeks, bay scallop ceviche, snow crab beignets, and seared salmon with brandade. But it was the soup that I couldn't stop thinking about. Made by Chef Andrew Hodge, the bright orange purée was garnished with curried pears and spiced pecans. It was hands down the best butternut squash soup I had ever had. Of course I wanted the recipe, so I sent out a message on Twitter and within minutes, the JBF had sent me the recipe! Amazing what modern technology can do.

Despite the fact that I develop and write recipes, I have a problem following them. Every time I look at a someone else's recipe, even when I've tasted the end result and know how good it is, I always start thinking of ways to change it. This was no exception. Chef Hodge's recipe was impeccable, but there were still a few tweaks I wanted to make. For one, it had a cup of cream in it that I was determined to eliminate. I also wanted to roast the butternut squash rather than just boiling it. There were a few spices I wanted to add, and I decided to puree the pears into the soup. I also eliminated the pecans (though they were super-delicious). In the end, I completely changed the recipe but came up with a super-silky, ultra-flavorful soup, that looks, smells, and tastes like fall. Thank you Chef Hodge for your inspiration!

Salt and pepper to taste

Place the squash, onions, and carrot in a large bowl (or Ziploc bag) and toss with the olive oil to coat. Arrange on a baking sheet and season with salt and pepper. Scatter 4 thyme sprigs on top of the vegetables. Roast for 30 minutes or until tender. Discard the thyme sprigs.

Dump the squash mixture, garlic, and spices into a pot and cook over medium high heat for a 2 minutes, stirring to combine. Add the vegetable stock and remaining thyme springs and bring the mixture to a boil. Reduce to a simmer and cook, covered for 10 minutes or until tender. Remove from the heat and let cool slightly. Discard the thyme sprigs.

Working in batches, blend the mixture in a blender until smooth. Feel free to thin with additional broth if it appears too thick. Pour back into a clean pot to keep warm on the stove. Season with salt and pepper to taste.

For the pears, heat the olive oil over medium-high heat in a large sauté pan. Add the pears and cook for about 2 minutes. Add the spices and continue cooking, stirring constantly for another 3 minutes or until the pears are tender and coated with the spices. Set aside.

• Add a big spoonful of spiced pears to each bowl of soup and have your guests stir them into the soup.

• For a smoother, more complex soup, blend the pears into the soup (using the blender, working in batches). This is what I did and end result was outstanding! The spiced pears blended beautifully with the earthy flavors of the roasted butternut squash soup.

• Garnish each bowl with a dollop of crême fraiche or yogurt and, using a toothpick or wooden skewer, sketch little white patterns into the surface of the soup. (Mine turned out kind of ugly, but it's fun to try!)

• This soup can be made several days in advance–just store in an airtight container in the refrigerator and reheat over medium heat on the stove. 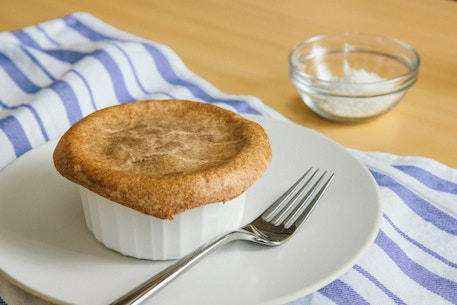 Chicken pot pies remind me of my childhood. We ate them probably once a week–the frozen ones that came in little aluminum tins with chicken, carrots, and peas. And that delicious pastry. The house smelled so good when they were in the oven, and we'd race to the table when the buzzer went off. Mom would bring them to the table with (unheeded) instructions to let them cool off a bit. I loved the moment when my fork would break open the crust and a huge gust of steam would escape. The filling was... 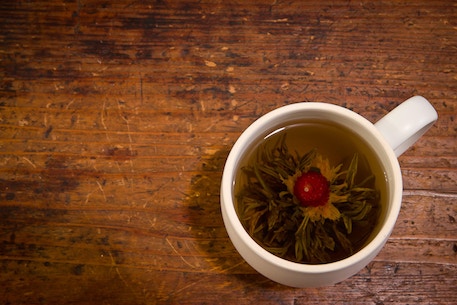 Why I Love Fall in NYC

This was one of those weeks where I was reminded why I love living in NYC. It's fall, the days are cooler, the leaves are changing, and the city is bursting with energy. Working in the food and travel industry, I get invited to some pretty cool events. Though I've never done a "Week in Review" post, I had too many delicious experiences this week not to share. One of these was the chance to taste real jasmine tea at Megu, made by pouring hot water of a dried jasmine flour. Amazing! They gave me...