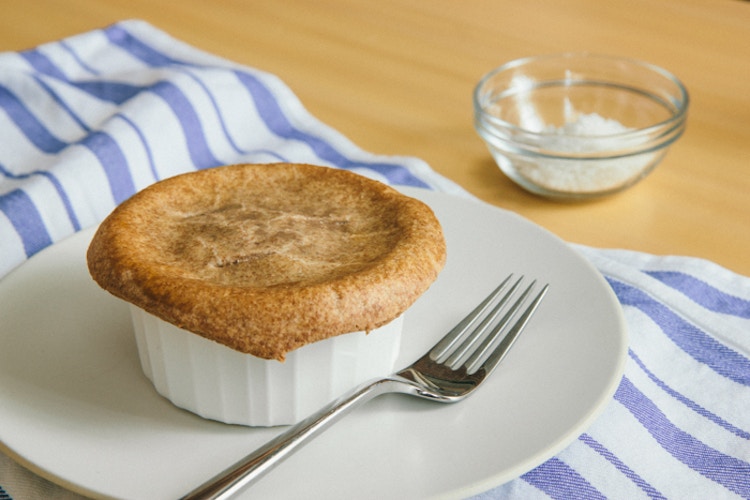 Chicken pot pies remind me of my childhood. We ate them probably once a week–the frozen ones that came in little aluminum tins with chicken, carrots, and peas. And that delicious pastry. The house smelled so good when they were in the oven, and we'd race to the table when the buzzer went off. Mom would bring them to the table with (unheeded) instructions to let them cool off a bit. I loved the moment when my fork would break open the crust and a huge gust of steam would escape. The filling was practically boiling. Despite mom's warnings of "Be careful, you'll burn your tongues!" we dove right in, blowing on each bite briefly, and of course promptly scalding our entire mouths. We'd spit out the first bite and gulp our cold milk to cool our scorched tongues. And then we'd dig back in and do it again.

It wasn't until last winter that I actually attempted to create my own chicken pot pies. Maybe it was something about being newly married and wanting to nest, or maybe it was the brutally cold January weather that pushed me to make this childhood favorite. Since mom had never attempted to make them from scratch (with three kids, I don't blame her!) I didn't have a recipe to go by. So I started experimenting. I knew I wanted to create a dish that was ultra-flavorful, but was hoping to make it healthier than the typical butter- and cream-laden version. I decided to make a whole wheat crust, and to add lots of veggies to the filling–carrots, celery, and kale in lieu of the peas. Instead of milk or cream in the filling, I used stock and some white wine, and added fresh thyme for an extra herbal note. The first few times I made this, I admit I used store-bought crust to save on time. But recently I thought, "how hard can it be to make my own 5-ingredient pastry dough?" As it turns out, not hard at all. This whole wheat crust recipe is super-simple to make–especially if you have a food processor. (Otherwise you can use a fork and knife, or a pastry cutter.) 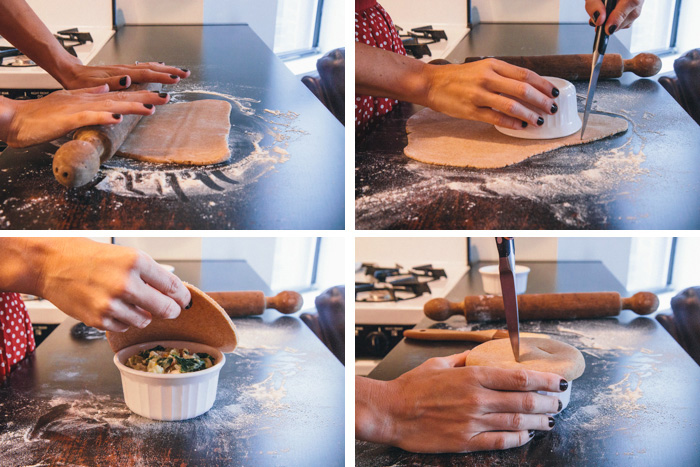 Make sure to chill your dough for at least an hour before rolling out. It's important for it to have a chance to rest or else it will be tough and brittle. You can actually make the pastry dough a day in advance–just keep it wrapped in plastic wrap until you are ready to use it. Actually, this entire recipe can be made in advance, which makes it ideal for entertaining. Make your filling the day before and fill four 6-ounce ovenproof ramekins. Cover with plastic wrap and keep in the refrigerator until ready to bake. Just before baking, roll out your dough and cut your pastry circles, assemble the pot pies, and slide into the oven. Almost as easy as those frozen ones (and so much better!). 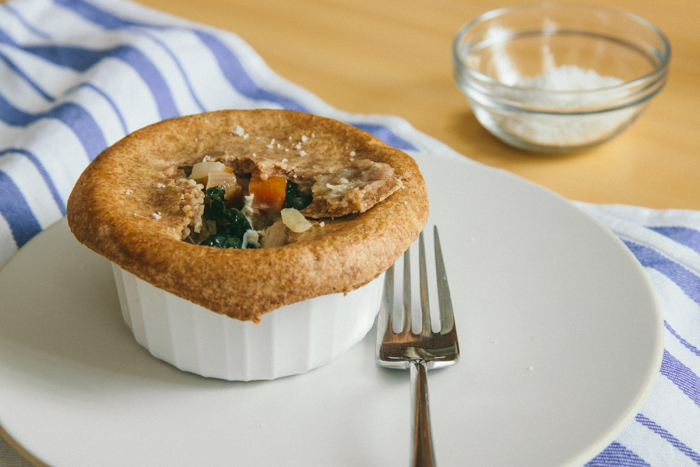 This is a great way to get your kids–or husbands!–to eat their veggies. With the yummy whole wheat crust and the creamy chicken filling, they'll hardly notice the carrots and kale. After eating chicken pot pie two days in a row this past weekend, Brandon said this was one of his all-time favorite things I make. Coming from a former vegetable abstainer, that's an especially high compliment! Of course, despite a lifetime of warnings, I still managed to burn my tongue on my first bite (and second, and third). No one's fault but my own...I suppose old habits die hard!

You may not have heard, but today is our first national Food Day, organized to celebrate healthy, sustainable eating. I'm really pumped that a day like today actually exists, to promote things I feel so strongly about. You can read more about the movement's objectives (like supporting sustainable farming, promoting healthy food choices for kids, and fighting diet-related diseases) here or participate in one of the many nationwide Food Day events. Or you can do what I'm doing and cook a healthy... 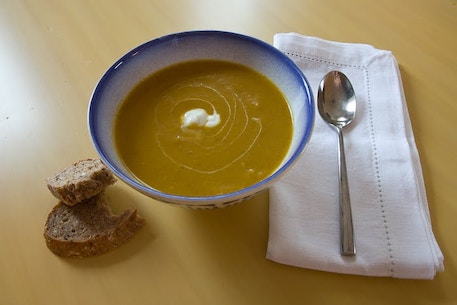 When the weather gets cool, I want soup. Daily. There's nothing more comforting and warming than a big, steaming bowl of homemade soup. With really good crusty bread. I mentioned in an earlier post that my husband Brandon sadly does not share my love of soups. But I keep making them. They feed a crowd, they make the apartment smell heavenly, and they provide me with lunches for a week every time I make them. And did I mention that they freeze well? I have so many favorites: Tuscan white bean...