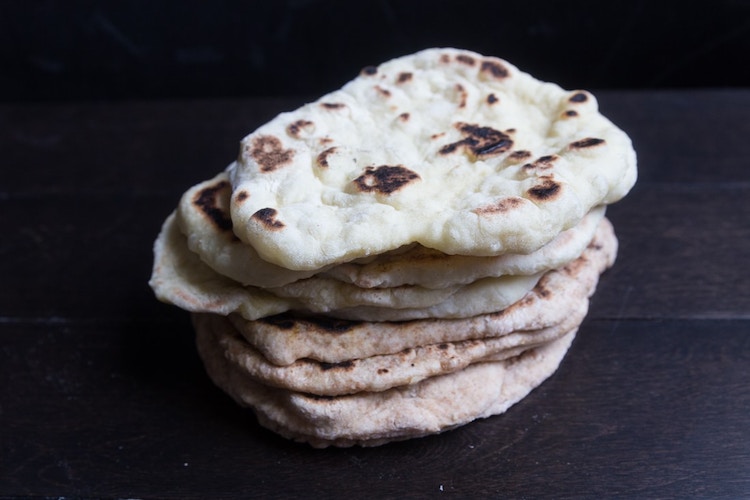 Hi friends! After a busy week in Nashville, I'm back in NYC and I couldn't be happier. Today is one of those dreamy spring days where the sky is bright blue, the sun is shining, and all the cherry blossom trees are in full bloom. We're talking cotton-candy colored trees everywhere. Tulips and daffodils are at their peak, and winter-hardened New Yorkers are walking around with actual smiles on their faces (can you believe it?!). Everyone's sitting outside, soaking up the sunshine – you'd kind of think the whole city took the day off work!

I could go on and on, but what I really want to talk to you about is naan. You know, those warm, puffy, oval-shaped flatbreads they serve at Indian restaurants (ideally brushed with ghee). The ones that you can't stop eating? I'm obsessed. Though I always keep a pack of store-bought naan bread in the freezer so I can whip up naan bread pizzas (Tomato & Basil, or Ricotta with Shaved Asparagus), I've recently started making my naan from scratch and oh. my. goodness. The homemade ones will truly knock your socks off. They've got that same tangy flavor and puffy, heat-blistered texture that I love. It's the perfect accompaniment to a slow-cooked dal or chicken tikka masala – or my Tomato Chickpea Curry with Kale. And though it does take some time for the dough to rise, naan is really not that hard to make. 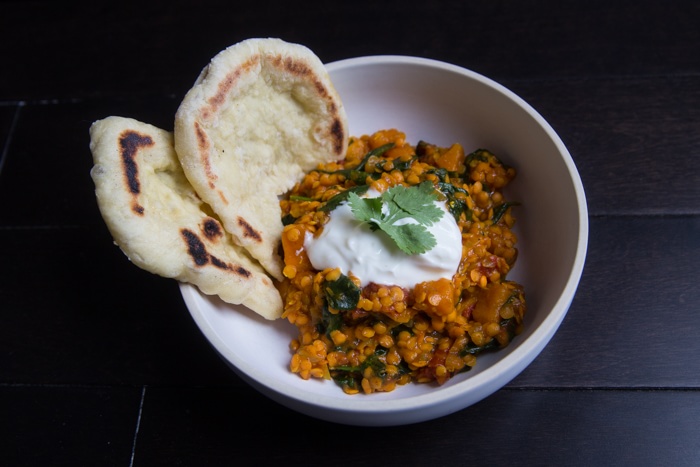 I first started experimenting with naan-making back in March when I was in D.C. for a dinner party. I was making my ricotta and asparagus pizzas for appetizers, and when I heard that the hosts had a pizza oven, I decided to make the naan from scratch. I researched recipes online and settled upon this one by Aarti Sequeira (from Food Network's Aarti Party). It seemed really straightforward and got great reviews so I decided to give it a try. First off, I eliminated her addition of fennel and nigella seeds, I swapped the sugar for honey (and reduced it from 2 teaspoons to 1), and I experimented with using a combination of unbleached all-purpose flour and whole wheat flour. I tried letting them rise 1 hour, 2 hours, and 4 hours, and also tried doing 2 risings. I also tried cooking it on a cast iron skillet, on a nonstick pan, AND in a pizza oven. After a bunch of trial and error, here's what I found out:

1) When you're adding in the warm water, use a thermometer to make sure it's exactly 100 degrees. If it's too hot, it will kill the yeast and it won't bubble.

2) Though I had high hopes for whole wheat naan, the texture is best when it's made with all-purpose flour. The wheat flour absorbed much more liquid, and though the dough was really easy to work with, the naan turned out a bit dry and lacked flavor. The all-purpose flour dough was really sticky, so you have to add in flour as you're kneading, but it puffed up beautifully when cooking, had a much more tender texture, and the flavor was great.

3) A pizza oven works amazingly well for naan. These naan turned out the puffiest of all, and got a great char on the outside (which I love). Of course, since most of us don't have pizza ovens, I found that a cast-iron skillet or a non-stick skillet or griddle over high heat work well.

4) Use active dry yeast out of a jar or a package – but not the rapid-rise kind. The rapid rise works more quickly, but you'll lose texture and flavor in the naan.

5) The only equipment you need is a rolling pin. And a cast iron skillet or large nonstick pan.

6) The longer the naan dough rises (up to 4 hours), the better the flavor. But honestly I think that the best result was to let the dough rise for 2 hours, then knead and make the dough balls, and let them rise 30 minutes. Then roll and cook. 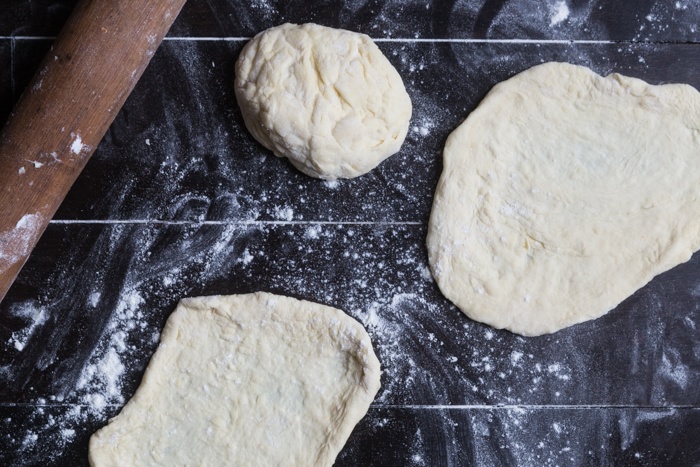 (According to Aarti, you can make this same recipe with 2 1/4 cups gluten-free flour mix, plus 1 1/4 teaspoons xanthum gum. Let me know if any of you try the GF version, and how it turns out! I haven't tried this yet.)

Enjoy the recipe, and stay tuned Friday for a yummy, vegan dal recipe (orange lentils, sweet potato, and spinach) to go along with your naan! 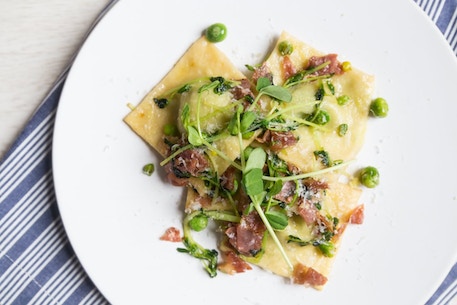 Happy Friday friends! I'm back at the counter in my mom's pretty kitchen, sipping coffee and enjoying the beautiful morning light. I have to say, I'm kind of digging the suburban life for a few days. Grocery shopping with a car (!!), going for hikes at Radnor Lake, cooking with friends in their huge kitchens. Living in NYC kind of feels like living on another planet by comparison. As promised, I have a special treat for you: a recipe for spring pea ravioli, with pea shoots and prosciutto. I... 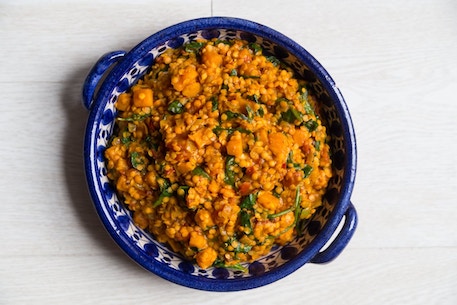 How is it already May?!?! Is anyone else scratching their head and asking, "Where did this year go?!" It seriously feels like it has FLOWN by. Funny to think that exactly one year ago today, I was hosting a dreamy spring dinner party with ABC Carpet & Home (styled by my dear friend Jenn Elliott Blake) at DRIFT Studio, to announce the upcoming Yellow Table cookbook road trip/Kickstarter campaign. I really think that was one of my favorite nights of all time. And I can't believe all that has...