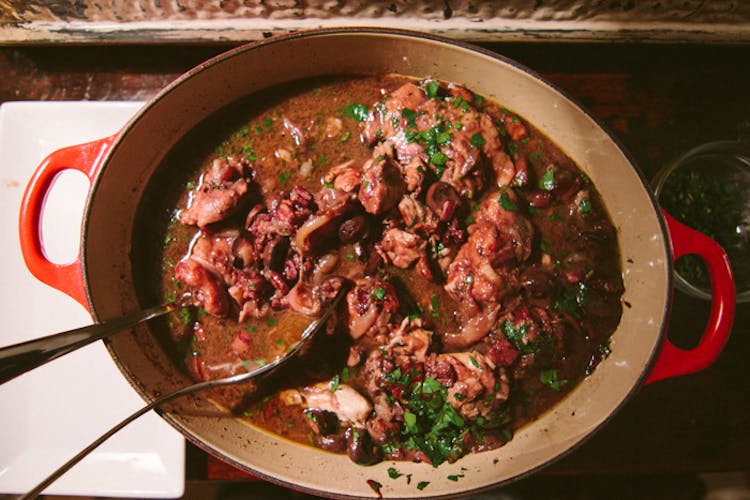 Is it really December again? Maybe it's because we spent Thanksgiving eating empanadas south of the Equator, or maybe it's because it's been a balmy 60 degrees in NYC, but the fact that Christmas is a mere three week away comes as a complete shock to me. I absolutely love this time of year, but I feel like I didn't get a chance to mentally prepare. We got back December 1st, and the season was already in full swing: the city ablaze with lights, and every shop and restaurant decked out in their holiday finest. We got our own spindly little Christmas tree last night, and now that it's covered in lights and ornaments, it all feels a bit more real.

I love having friends over around the holidays, but I have a few rules: no fussy bite-size foods, no layered dips, and no brightly colored peppermint-flavored cocktails. In fact, I like to host dinner parties this time of year that are exactly opposite of the de riguer cocktail parties. You can only take so many nights of spinach dip, mini quiches, and pigs-in-a-blanket until you just want to eat some real food! I'd rather gather people around a table for some good conversation and a simple, home-cooked meal.

One of my winter dinner party favorites is a classic French dish that never goes out of style: coq au vin. Though the name might elicit giggles, coq is the French word for an old hen. Traditionally the dish was made with a tough old bird, as the red wine would slowly tenderize the meat over several days as it marinated and simmered, making a lusciously flavorful stew.

I don't remember when exactly I first tried this hearty dish, but I do remember the time I ate it four times in one week (something I do not recommend). It was in November 2003 and I was writing a story for Intermezzo magazine on the best coq au vin in Paris. So for the sake of research, I ate it at out at three restaurants and made it once at home. It was interesting seeing the difference between dishes: some were served with potatoes, some with noodles, some sauces were lighter in body, and one had a sauce so dark and velvety, it almost looked like melted chocolate. Each was unbelievably fantastic, though I think it took me a year or two before I could look at it on a menu again. (My favorite, for the record was at Chez René at 14 Boulevard Saint-Germain in the Latin Quarter. They don't have a website, but their number is +33 (0)1 43 54 30 23.)

If you have a Le Creuset Dutch oven, this is the time to pull it out. Feel free to use any type of chicken (an old hen isn't necessary) and if you're short on time, as I usually am, you can skip the overnight marinating. The chicken pieces are slowly simmered with red wine and aromatics until the apartment smells heavenly, and garnished with sauteed lardons (the French version of bacon), pearl onions, mushrooms, and chopped parsley just before serving. It's absolutely decadent with the rich wine sauce, and is perfect served with mashed or roasted potatoes and a big green salad. Or a lighter accompaniment, I love serving it with a pile of blanched green beans tossed in a Dijon vinaigrette. But best of all, coq au vin can be made completely in advance–in fact, it actually tastes better if you make it the day before and slowly reheat it before the party. Which is ideal for the host or hostess who actually wants to spend time with their guests rather than cooking up until the minute everyone sits down at the table! 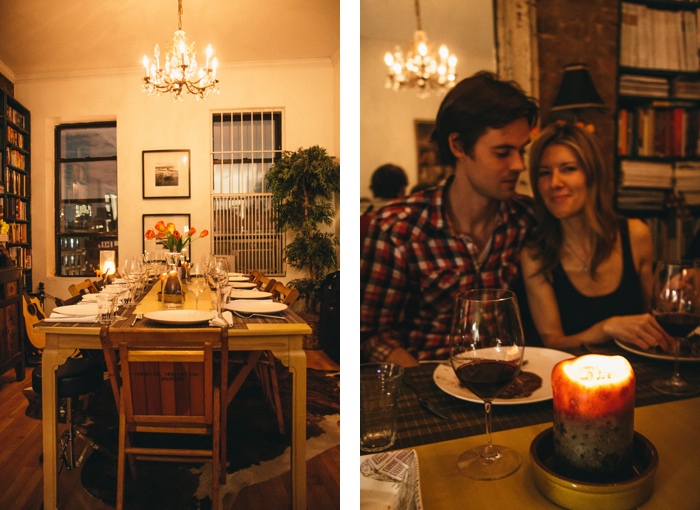 I read an intriguing article recently in the New York Times that talked about the fabulous dinner party hosts and hostesses of Manhattan in days past (as in the days when people still regularly had dinner parties), and one of the things they all shared in common was their love of simple foods. A roast chicken, a pot of stew, a big green salad – foods that were comforting, hearty, and that wouldn't keep the hostess in the kitchen all night. Ultimately, their belief was that the mix of people–and the conversation–around the table was the most important thing at a dinner party. In fact, as the article points out, there is a particular art to arranging a table (as in who sits by who) and a good host should always be subtly leading the conversation. Interesting stuff, and definitely worth a read.

Moral of the story: invite an interesting mix of people over for dinner this month. Seat everyone in a surprising combination (i.e. don't be afraid to put the finance guy next to the film producer or the musician next to the architect). Keep the conversation lively, the wine flowing, and the food simple. And give coq au vin a try. After weeks subsisting on cocktails and catered hors d'oeuvres at office holiday parties, your friends will thank you!

This is not a purely traditional version, as the chicken is not marinated overnight. I also–perhaps scandalously–substituted shallots for the pearl onions as the peeling process is so much easier! I find this to be just as delicious, and much quicker to make.

16 medium shallots, peeled and halved lengthwise (or you can use the traditional pearl onions, peeled)

Preheat oven to 325 degrees F. Tie parsley stems, bay leaves, and thyme together in a piece of cheesecloth, set aside.

Heat a Dutch oven over medium heat and saute the bacon until crisp and browned, 6 to 8 minutes. Remove with a slotted spoon and set on a paper towel-lined plate.

Pat the chicken pieces dry and season with salt and pepper. Add a tablespoon of oil to the bacon grease and increase heat to medium-high. Working in batches, brown the chicken on all sides, about 6-8 minutes; set aside.

Add another tablespoon of oil to the pan and add the celery, carrot, onion, and garlic. Saute until softened, 6-8 minutes. Season with salt and pepper. Add flour and cook for 1 minute, stirring to coat evenly. Whisk in wine and chicken broth and bring to a boil. Remove from the heat; add chicken pieces, and herb bundle, nestling them into the vegetables. Cover and bake in the oven until tender, about 1 1/4 hours.

Carefully remove the Dutch oven from the oven - it will be very heavy and very hot!! Transfer the chicken to a plate and cover with foil to keep warm. Strain the sauce, discarding the vegetables and herbs. Taste and season with salt and pepper as needed. Keep in a small saucepan to warm before serving.

Place the chicken back in the Dutch oven (or on a large serving platter) and top with the bacon, shallots, mushrooms, strained sauce, and chopped parsley. Serve with mashed or roasted potatoes, and green beans or a green salad.

TIP: This can be made a day or two in advance (minus the final parsley garnish) and reheated in a 300 degree oven before serving. Just don't store it in the Dutch oven in the refrigerator. A cold Dutch oven going into a hot oven will break! Store coq au vin in tupperware and just pour it back into the Dutch oven before reheating. Garnish with chopped parsley right before serving!

*If you can't find slab bacon, just use extra-thick packaged bacon and cut into 2-inch slivers.

I did something last week that I have never attempted before: I fasted from coffee. Given that I've had coffee just about every day since I was 16, this was a daunting prospect. Coffee is my brain's ON button in the morning. It's the difference between a grumpy, don't-talk-to-me Anna and a friendly, life-is-good Anna (just ask Brandon!). I crave not just the caffeine, but the aroma, the taste, and most of all the ritual. I'm a traditionalist - I make my coffee in a single-cup drip cone filter... 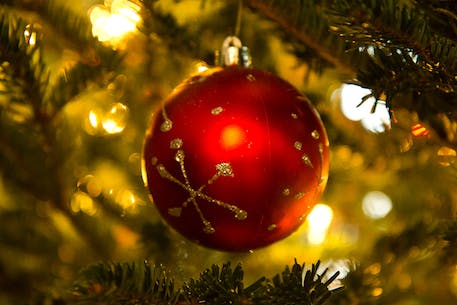 If you're anything like me, you're a procrastinator. Which means you are just now starting to think about Christmas shopping. Yes, I know Christmas is a mere 9 days away. And I know that responsible shoppers avoid the crowds and shop in November. Or before. But I am by no means a responsible (or enthusiastic) shopper - I'd just as soon bake everybody a loaf of pumpkin bread and call it a day. The good news is, there's a thing called online shopping. Which, shockingly, I just recently embraced...