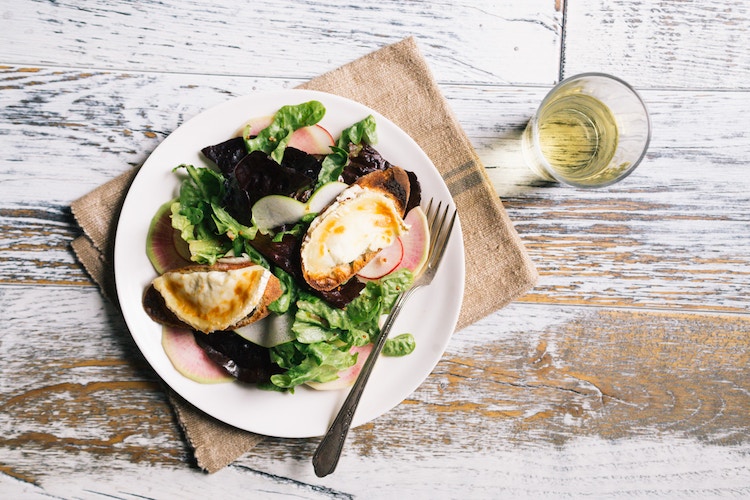 Back in 2002, as a college senior, I met with Lori Powell, who at the time was a food editor at Gourmet magazine (R.I.P.). I had randomly picked her name off the masthead, and she was kind enough to let me come in and ask her questions about her job. She couldn't have been any nicer: she took me on a tour of their test kitchens and explained that she didn't do much writing - she was actually a food stylist. It was the first time I'd ever even heard of that job. She explained that she was the one who cooked the food for the magazine's photo shoots – sometimes in remote locations – and made sure it looked perfect. She said it was really hard work, especially when it involved shooting ice cream on a hot day, or staging a dinner party at 6 a.m. in a barn to get the perfect light. It had never dawned on me until that day that food styling was even a possible career...but I was definitely intrigued.

It's funny to look back on that conversation and see how a seed was planted. Twelve years later (and going on seven in NYC) food-styling is a major part of my career. I got started many years ago assisting the food stylists at Real Simple and Martha Stewart Everyday Food, and have since worked as lead food stylist on shoots for Gourmet Live, Anthology, and several TV shows. Now that we're shooting The Yellow Table Cookbook, I'm styling each week and loving it. Lori was right: it's hard work, but it's also so creatively rewarding. I love telling a story with each picture, and making sure the colors and textures pop.

In the spirit of my Recipe Testing 101 post, I thought I'd answer a few questions I get asked a lot about food-styling. The most common question I get asked (for some reason) is:

Do you use lots of Vasoline?

No! Absolutely not. I think back in the 90's Vasoline was used to make foods look shiny in TV commercials or something, but I'd never put something on food that would make it inedible. My goal is always to make the food look as natural as possible. If I want something to have a nice sheen to it, I'll brush it with olive oil. If I want vegetetables to look extra-fresh, I sprinkle them with water.

What tools do you use?

Professional food stylists carry around a huge tackle-box of tools. Since I'm mostly working in my own kitchen right now, my tools are all here. To be honest - outside of my knives and cutting boards - the 'tools' I use the most are my hands. There's simply no better way to arrange a salad or arrange a series of hors d'oeuvres. I small spoons - for stirring soup or set or spooning a broth over something. Occasionally I'll use tweezers for arranging something very delicate, but most of my food is pretty simple and rustic, so it's not necessary. I use my mandoline quite a bit (for cutting vegetables and fruits really thinly - like in the salad above), as well as my fine-mesh strainer (for dusting desserts with powdered sugar or cocoa), pastry brushes (for brushing food with olive oil or water), and lots of baking sheets - for moving stuff from my kitchen across the room to the set. The one tool I need is a spray bottle, for misting salads and produce (note to self!). 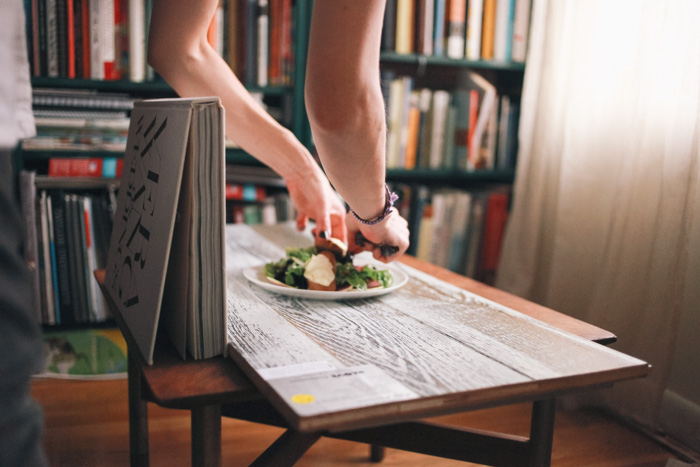 Walk me through a photo shoot - what exactly do you do?

For the food stylist, the shoot begins the day before. I do all of the grocery shopping and do as much prep-work as I can the day before. For example, if we're shooting a bundt cake or a pureed soup - somethng that can easily sit overnight and still look great the next day - I'll get that done in advance. Also, since I'm doubling as prop stylist on the shoot, I select and pick up all of the props the day before.

The day of the shoot begins early. I want to start cooking before Signe, the photographer, gets in. She usually arrives at 10 and we re-arrange the living room: the table, the chairs, and the litter box get moved to the middle of the room, and we create our photo set-up by the window. We unwrap the props, Signe starts ironing fabrics and starts taking test shots for the light, I get the first dish ready and then we start shooting.

It's really a race against the clock, as we're using all natural light. In the winter, the light starts fading by 3 p.m. so we really have about a 5-hour window to work. In the summer, of course, the light lasts longer, but it's also more direct which isn't as ideal. I prefer the softer winter light, personally.

For each shot, we set up the props (maybe a napkin, a plate, and a fork, or a couple of bowls) exactly where we want them, and I bring the food over and arrange it directly onto the set. If it's a soup, I'll carry the pot over and carefully spoon it into the bowl. I tweak the food just enough to make it look as beautiful as possible and then Signe takes over.

As soon as the shot's done, we clear the set and I race to make the next thing. We always aim to try and shoot 5-7 recipes per shoot day, though it's getting harder and harder with the fading light. 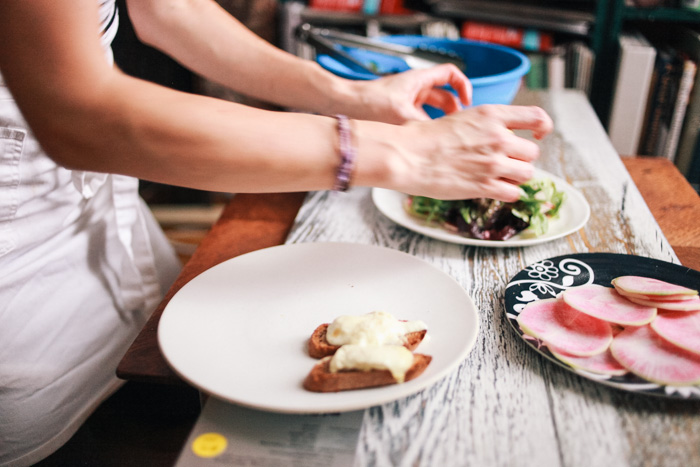 How did you style the salad above?

I wanted this to be a composed salad, with a lot of layers and elements. First we prepped all the elements: I had Elise slice the radishes and apples really thinly on a mandoline and wrapped everything in damp paper towels. We washed the lettuces and I made a simple Dijon vinaigrette. I ended up making this salad two days in a row, because the first day the light faded before we got a good shot. The goat cheese on day one was too creamy (as you can see in the pictures and it wouldn't really brown under the broiler). I got a different goat cheese on the second day - one that was drier and had a rind around it. This one broiled beautifully (which is exactly the look I wanted!).

Once I have all of the elements prepared, I composed everything on the plate: watermelon radishes first, then the lettuces, gently tossed with the apples, radishes, and vinaigrette. I made a small mound in the center of the plate (with the radishs fanning out) and placed the two goat cheese croutons on top. I wanted it to have a sort of rustic, French bisto feel, so I added a glass of wine and a rustic napkin.

How would you describe your food style?

Do you have any go-to styling rules?

1) Don't crowd the plate. Leave plenty of white space. 2) Don't over-do it with the props: let the food be the star. 3) Use a very light hand when tossing salad greens with vinaigrette - you can always add more, but the last thing you want is a flat salad! 4) Don't be afraid to make it look a bit messy: I love crumbs and signs of real life. 5) Above all else: make sure it looks delicious!! Food-styling is an art, but at the end of the day, it's all about making the food look really appetizing. 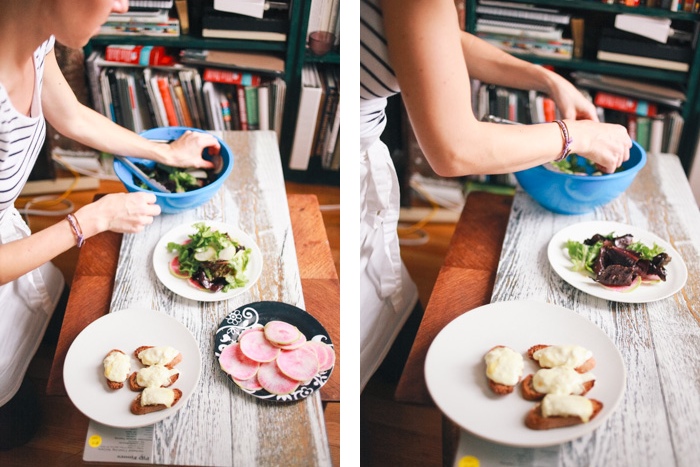 What are a few of your favorite shots from this project, styling-wise?

I love telling stories with each photo. For the cookbook, we are focusing on the food and keeping the prop styling to a minimum. But for the blog, I like to create scenarios where it looks like two friends were having tea and cake, or lovers were enjoying a steak dinner together and they're plates were snapped mid-meal. Some of my favorite shots so far (besides the two I just mentioned) have been the raspberry bars, the bundt cake, and the holiday hors d'oeuvres.

Oh and I really liked the kale and Delicata squash salad. I'm excited to see Signe's and my work really beginning to gel. I can't wait to see it in print.

What's your favorite aspect of food-styling?

The creativity. Making food look really beautiful. And working with Signe - we really see eye-to-eye on the styling, which makes the process a pleasure!

Piles and piles of dishes! And all of the extensive prep and tear-down. It's a lot of work.

Any tips for future food stylists?

If you're serious about doing this professionally, get experience assisting a food stylist. I learned so much by working under food stylists early in my career. I did all the grunt work (prepping, shopping, dishes), but got to watch them work, and picked up invaluable tips. Look at food magazines and cookbooks to understand what styles you're drawn to. And practice at home - create a blog or start making dishes, style them, and photograph them. Even if it's with your iPhone, it can help you document ideas. Having a culinary degree certainly helps, but it's not absolutely vital if you get lots of hands-on experience.

(Salad photo by Signe Birck; other photos by Elise Inman) 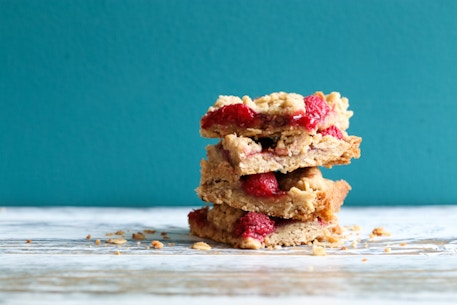 "Joy comes to us in moments – ordinary moments. We risk missing out on joy when we get too busy chasing down the extraordinary." - Brene Brown Ahhh...I love this time of year. It's been snowing all morning here, and we decorated our tree last night. Despite living in one of the most sophisticated cities in the world, there's still nothing quite as magical seeing our dinky little Christmas tree all lit up. Last night we turned off all of the lights, turned on the Christmas music (OK maybe it... 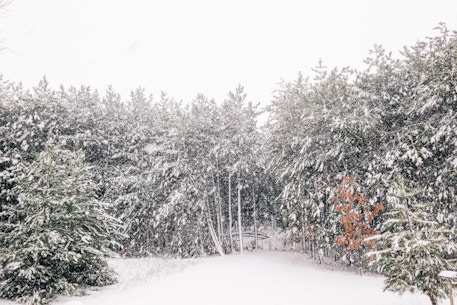 Day 37: Remembering to Be Still

Oh to be back in this picture right now! This was taken a year ago, up near Traverse City, Michigan. We were visiting our good friends Megan and Mike Gilger, and the snowy trees in their backyard were simply breathtaking. We got 20 inches of snow that night, and ended up getting stuck trying to drive down the street the next morning. So, we we all got out, tried to push the car, and the guys ended up having to dig the car out and push/drive it back into the driveway. The advenures of a snowy...