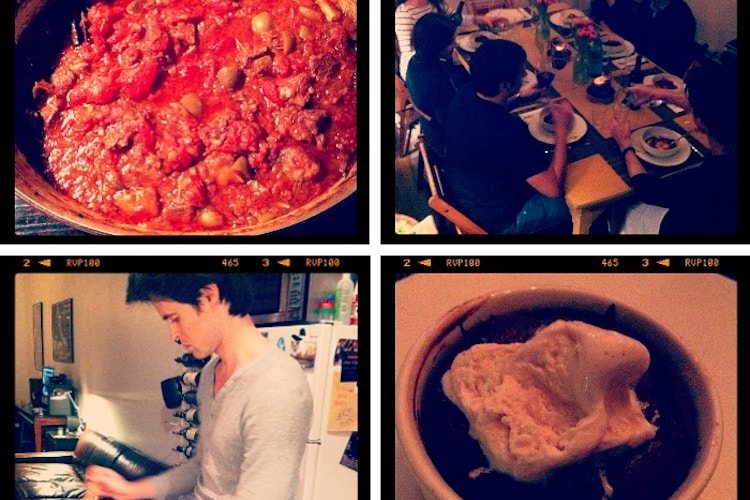 This past weekend we hosted our second official storytelling dinner around the yellow table, and what a fun night it was! Our last one was back in the fall, and though we've had a few dinners in between, we hadn't had a proper storytelling night since. If you're new to The Yellow Table, you may be wondering "What is a storytelling dinner?" Well I'm so glad you asked. Our storytelling dinners (inspired by a Moth event I attended last fall) consist of friends (both new and old), sitting around the table, eating good food, drinking wine, and sharing stories. Basically, it's what I hope heaven will be like!

The original storytelling night, our topic was "Firsts," with stories ranging from crazy blind dates to biking accidents and police busts to a creepy ghost-spotting in an abandoned hotel. Everyone had a ball – it was so fun to see a group that only marginally knew each other (and some, not at all), linger over the dinner table well after midnight laughing and talking like old friends. This time, our theme was "Travel" and we heard stories of couch-surfing in Siberia, busking through Italy, and a near lion attack in South Africa. Again, the stories spiraled and we all lingered at the table long past dessert.

I really believe in the power of storytelling to connect and inspire – just think, it's what people sat around and did for thousands of years before there was television or Internet! It's funny, though, how people feel a little uncomfortable with the idea at first. We've all got stories to tell, and though we can post our thoughts and whereabouts on Facebook and Twitter all day long, telling a story with a beginning, middle, and end to a live audience (rather than a virtual one) seems a rather intimidating task. Which is exactly why I think little practice never hurt–especially when everyone ends up having fun in the process!

As for the food, since it was a cool, rainy night, I wanted to make something warm and comforting, preferably a stew that could simmer for hours in my Le Creuset dutch oven while I worked on the other dishes. I finally settled on Melissa Clark's fragrant Braised Pork Shoulder with Tomatoes, Cinnamon, and Olives over Polenta from her newest cookbook Cook This Now. Melissa is pretty much my culinary idol – I love her straightforward, seasonal recipes and her wonderful writing that somehow manages to be both authoritative and chatty all at once. I basically want to go hang out in her kitchen and cook with her after reading any of her recipes. Per usual, this one did not disappoint. The intriguing blend of flavors – sweet canned tomatoes and cinnamon, salty anchovies and olives, dry red wine, and a few sprigs of rosemary – melded together to create a braised pork that was meltingly tender and almost tagine-like in taste.

I served goat cheese crostini with kumquat chutney for starters (since I have all this chutney lying around!), and a nice light arugula, fennel, and orange salad as a palate cleanser after the pork stew. And last, but not least, at the request of my husband – who as the birthday boy got to choose his dessert – I made Bittersweet Chocolate Pudding Cakes inspired by a recipe I found in the New York Times. I made the recipe gluten free and used 60% Bittersweet Valrhona chocolate. The result was decadent. B got a candle in his cake and we ended the night singing happy birthday to him.

I hope you feel inspired to host your own storytelling dinner, and if you do, I'd love to hear about it! My sister hosted one in D.C. and her friends loved it – it would be fun to see the idea spread! But in the meantime, I'm collecting dinner party stories for a future post about your experiences...the good, the bad, and the hysterical. Feel free to comment below or send me an email at [email protected]. Can't wait to hear from you!

Braised Pork Shoulder with Tomatoes, Cinnamon, and Olives with Polenta 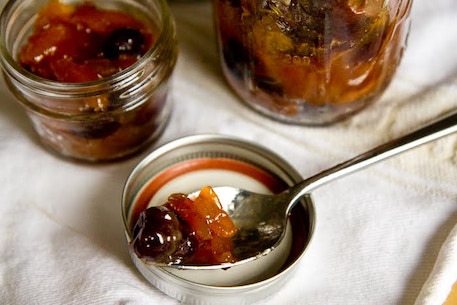 Chutney is one of those exotic condiments that I've always admired but never made (until recently). I'll eat it at Indian restaurants and I've bought it jarred occasionally when I make Indian food at home. A sticky compote of fruit and spices, it's sort of like a chunkier (and more flavorful) version of jam. It wasn't until I went to La Varenne that I realized you could make chutney from scratch. Actually, we made everything from scratch there, from croissants to stocks to preserves to sticky...

To say Chef Randall Price has led a fascinating life would be an understatement. This incredibly talented chef, writer, and teacher has cooked for presidents, diplomats, and royalty – in embassies, chateaux, and restaurants – and has written a book and a comic book series about (some of) his experiences. American-born, Randall has lived in France for 26 years, and he can thank Eagle Brand condensed milk for getting him over there for the first time (read on for details). I had the privilege of...