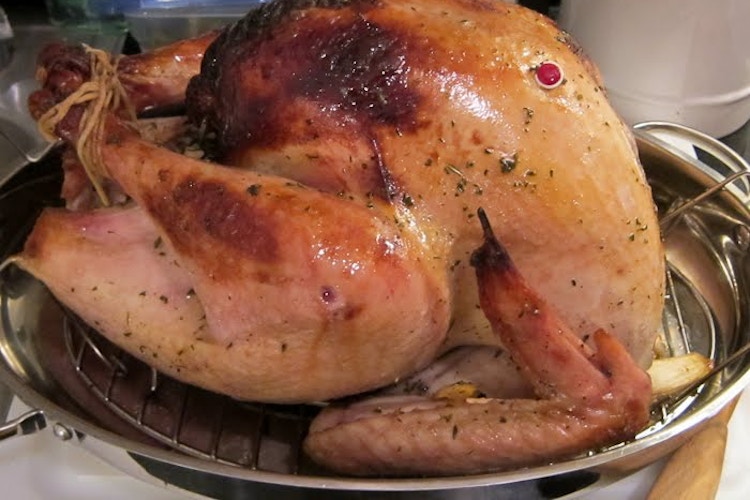 A few weeks before Thanksgiving last year, my in-laws threw us a lovely post-wedding reception near their home in Richland, Michigan. Because we were spending Thanksgiving in NYC with friends, my mother-in-law Jan insisted on cooking a Thanksgiving feast for us while we were there. I'd heard for years about her legendary turkey from Brandon, and it more than lived up to his praises: it was ultra-moist (a feat in and of itself) and so flavorful. When I asked her what her secret was, her one-word response surprised me: brining.

Though I had heard of brining, I had certainly never tried it myself, and I wasn't exactly sure what it entailed. Basically, brining involves soaking the bird for a day or two in a salt-sugar-water-herb mixture. Scientifically speaking, this soaking process breaks down the proteins in the meat tissues, allowing the turkey to absorb water and flavorings (and thus producing a much plumper, moister bird). Though you can make their own brine mixture, Jan swears by World Market's $5.99 turkey brine mixture. The stuff is amazing–you just add it to boiling water (and in her case, apple cider, maple syrup, and spiced rum) and stir until the salt and sugar melt.

You have to cool the mixture for a few hours, then you submerge the turkey in the brining liquid. 'And how in the world do you do that?' I can hear you asking. You can either place the turkey and the liquid in some unscented garbage bags (I highly recommend double or even triple-bagging it) or a sealable brining bag, or if you don't have the space in your fridge, you can use a a big cooler. Then just let the mixture chill for 12 to 24 hours. It does take some planning ahead, but I figured with an end result that good, I had to give this recipe a try.

Jan gave me a couple bags of the brining mix to take home, and I was inspired to brine my own turkey for Thanksgiving a few weeks later. We were having 12 people over, so I bought a 14-pound fresh turkey and two days before Thanksgiving, started the bringing process. Everything was going really well until I realized I didn't have a deep enough container to fit the brining bag with the turkey and brining liquid. I ended up using my deepest roasting pan, which was fine except for the fact that the liquid-filled bag was bulging over the sides. I made sure it was sealed well and carefully slid the whole thing into my refrigerator, praying that there would be no leaks for the next 24 hours.

Everything was fine until it came time to remove the turkey from the brining liquid. I gingerly carried the roasting pan with its bulging liquid contents over to the sink. I slowly unsealed the bag, intending to dump all the liquid into the sink before removing the turkey. I never had that opportunity. As soon as I opened the bag it collapsed, creating a flood of brining liquid–all over me, the counters, the floors, down into the burners on the stove, into the oven, and down in every crack and crevice of the kitchen. It was the biggest sticky mess you could imagine (I had put maple syrup and apple cider in the brine). I had to laugh–here I was trying to create the perfect turkey and I had created a Lucille Ball-type disaster. I wished I had an Ethel to call at that moment!

Though it took me several hours to clean my kitchen, fortunately the turkey was salvaged–I just rinsed it off, patted it dry, and proceeded to roast it as planned. And amazingly, the flavor and the moistness were as good (or even better) than I could have imagined. Brining really does make a tremendous difference. Though I'm still convinced that my mother-in-law's turkey is the best in the world, I'm on the fence as to whether I will brine this year. In a small kitchen, with a small sink and a small refrigerator, it is quite a challenge. And the memory of the last year's brine bath still haunts me! But there's no arguing that the turkey was delicious. Fortunately I still have another couple of days to decide.

The brine recipe below is based on my mother-in-law's and the turkey recipe is adapted from Alton Brown's Good Eats.

THE WORLD'S BEST THANKSGIVING TURKEYServes 10 to 12

If you are using a frozen turkey, make sure to thaw it completely in the refrigerator (for about 2 to 3 days) before starting the brine. Remove the innards (set aside if you want to use them for gravy later).

In a large pot, combine the brine mixture and the water and bring to a boil. Stir until the sugar and salt in the brine mixture has dissolved. Remove from the heat, cool to room temperature, then refrigerate until thoroughly chilled.

Place the thawed turkey breast-side down in a 5-gallon container or brining bag (or large unscented garbage bags). Carefully pour the chilled brining mixture over the turkey, along with a gallon of chilled apple cider and a cup of maple syrup. The turkey should be completely submerged in the liquid (you may need to weight it down to assure the turkey stays submerged).

Make sure the bag (or container) is well sealed and place it in the refrigerator for 12 to 24 hours, turning the bird once during the brining process.

Remove the bird from the brine (taking care not to dump the brining liquid on the floor like I did!!) and rinse inside and out with cold water and pat dry. It's ready for roasting!

Preheat the oven to 500°F. Remove all oven racks except the lowest one. Place the turkey on a roasting rack inside a roasting pan. Place the pear, red onion, rosemary, thyme, and garlic in the cavity of the bird. Tuck the wings beneath the turkey and tie the legs together (this helps it to roast more evenly). Using your hands, coat the entire turkey with the softened butter and season with salt and pepper.

Roast the turkey at 500°F for 30 minutes. Insert a probe thermometer into the thickest part of the breast (I use the electronic kind that sits out on the counter while the bird roasts) and reduce the oven temperature to 350°F. Roast for about 2 hours or until the internal temperature reaches 161°F. Let the turkey rest, loosely covered with foil, for 15 minutes before carving. 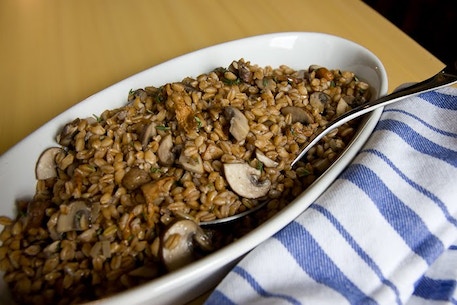 One of my favorite Thanksgiving dishes growing up was my mom's Brown Rice. (And let's be honest–it still is!) It's actually not brown rice at all: it's regular white rice that is baked with a can of beef consommé, a can of French onion soup, a can of mushrooms, and a stick of butter. The end result has a golden brown color (thus the name) and a deliciously rich flavor. And the house always smells heavenly while it's in the oven. However, the high levels of fat (from the butter) and the intense... 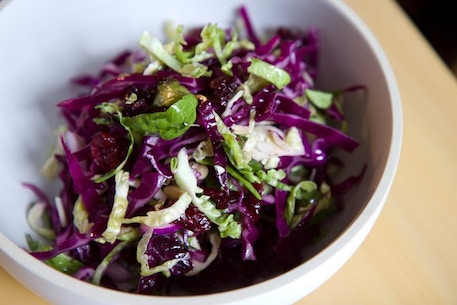 Though I hated them as a kid, now I LOVE Brussels sprouts. Usually I just eat them roasted with a little olive oil and sea salt. And maybe a squeeze of lemon juice or a sprinkling of grated Parmesan. I also love them in pasta, on a pizza, or alongside roasted fish or poultry. But recently I discovered how delicious they are raw–grated or thinly sliced into a slaw or salad. This salad was inspired by a recipe I saw in Food & Wine last year that combined roasted Brussels sprouts with raw red...