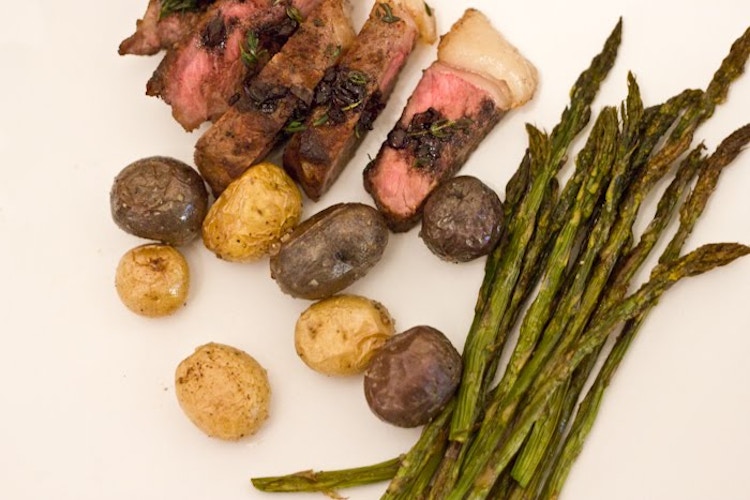 My husband and I have a little agreement. He eats the kale and quinoa and lentils I cook throughout the week, as long as I make him the occasional steak or burger. He's a boy and he needs his red meat. Me, I prefer grilled fish and salads, but I enjoy a good steak when I get the chance. Since we don't eat a lot of red meat (maybe once every two weeks), I don't feel bad splurging on really good quality local, organic, grass-fed beef.

When I lived in France several years ago, I grew to love their classic bistro meal "steak frites." Just a simple cut of meat (usually a hangar steak), seared and finished with a red wine pan sauce and a mound of skinny French fries. And usually a green salad on the side, for good measure. The meal is so popular, it could practically be their national dish. And lucky for us home cooks, this classic steak "marchand du vin" (winemaker's steak) takes less than 15 minutes to make! 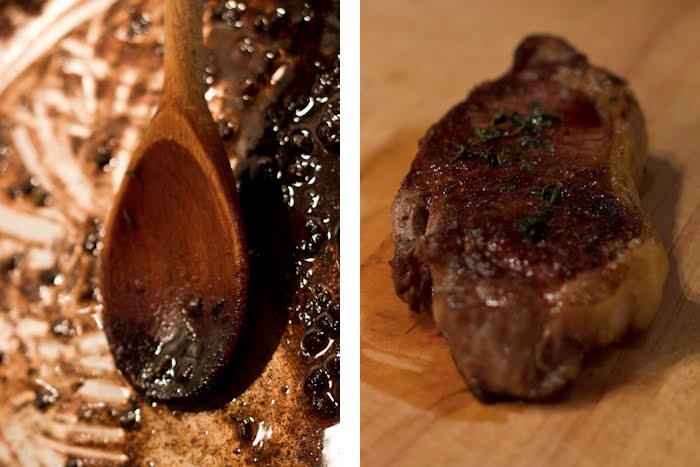 Since it's spring and asparagus is coming into season (hooray!), I decided to roast some asparagus and new potatoes in lieu of the fries and salad. And instead of a hangar steak–which is a bit stringy for my taste–I bought a more tender New York strip steak. Yes, the strip has much more fat than a hanger steak, but it adds lots of flavor and you can always cut it off after cooking. Use whatever full-bodied red wine you like for the pan sauce. It's actually a great way to use up any half bottles you have lurking around.

This makes a deliciously simple dinner party meal, as you can easily throw the veggies in to roast while your guests have a glass of wine, then sear the steaks and make the sauce just before sitting down. So easy, but so impressive. (And way cheaper than flying to Paris!)

Preheat the oven to 425°F. Cover two sheet trays with aluminum foil. Spread the asparagus on one tray and the potatoes on the other. Drizzle 2 tablespoons of olive oil over each tray (shake the trays to evenly coat all the veggies) and season generously with salt and pepper. Roast for 15 to 20 minutes or until softened and lightly browned. (The asparagus will probably take about 15 minutes and the potatoes closer to 20.)

Season the steaks with salt and pepper. Heat 2 tablespoons of the butter in a large, heavy-bottomed frying pan over high heat until it stops foaming. Add the steaks and cook for 2 to 3 minutes, until well browned. Lower the heat slightly, and flip the steaks to cook the other side, about 4 to 5 minutes for medium rare. Remove to a plate and keep warm.

Pour off all but 1 tablespoon of oil from the pan. Add the shallots and garlic and saute for 2 minutes or so (over medium high heat) until soft. Add the wine, turn the heat to high, and boil until reduced by half, stirring often to loosen any browned bits on the bottom of the pan. Remove the pan from the heat and whisk in the remaining butter until smooth. Whisk in the thyme and season with salt and pepper.

Slice the steak and drizzle with the sauce. Serve immediately, with the roasted potatoes and asparagus.

*Feel free to substitute chopped parsley or chives for the thyme. 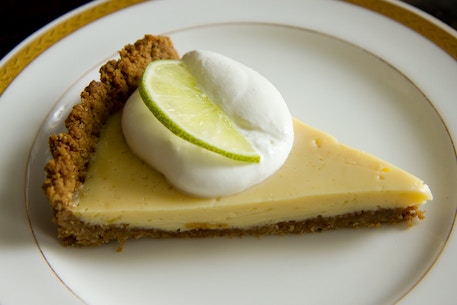 One of my all-time favorite warm-weather desserts is Key Lime Pie. Though I've never actually been to Key West (the home of this iconic dessert), I always order a slice or two when I'm in Florida. The best version I've tried so far is at Joe's Takeaway in Miami Beach. Theirs is the perfect combo of tart, sweet, and creamy, with a crumbly graham cracker crust. I also love the fact that when you order an entire pie (which we have!), they give you a can of Reddi Wip. As in the old school...

Happy (belated) Easter everyone! I hope everyone had a joyous weekend. Not only was the weather gorgeous, but even the trees – bursting with pink and white blossoms – seemed to send forth a message of redemption and resurrection! This year, we didn't really make any big plans other than to go to our church. Brandon recently started his IV antibiotics so we are sort of home-bound for awhile. We wanted to join some friends for a picnic in Brooklyn, but I had to be at church early to practice (I...