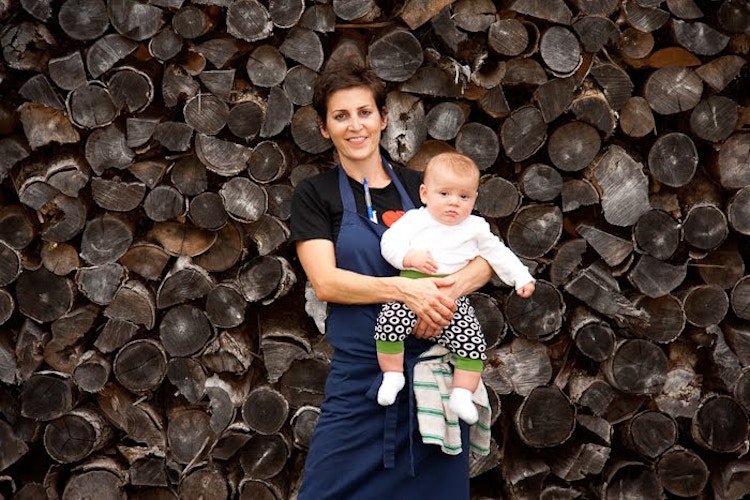 Reneée Lavallée is one of those women who manages to do it all–cook, write, teach, and make frequent television appearances–without breaking a sweat. And did I mention she has two little ones under age three? The Halifax-based chef has cooked in restaurants all over the world, from Toronto to Umbria, Italy, though now she's content to juggle her multiple roles as mom, chef, and writer outside the confines of a restaurant. Passionate about cooking as locally as possible, her blog The Feisty Chef highlights the natural bounty of Nova Scotia and offers great cooking tips and recipes (like the one for pickles below). I caught up with Renée while I was in Nova Scotia earlier this week and we chatted about cooking, dinner parties, and her life-changing run-in with Oasis front-man Liam Gallagher.

The Yellow Table: What first drew you to cooking?

Feisty Chef: I've always enjoyed cooking–every aspect. After doing very poorly at university, the choice was given to me: either buckle down and stay, or finding a new path...cooking. I applied to George Brown in Toronto, and the rest is history.

TYT: How did you get the name "The Feisty Chef"?

FC: Many moons ago, when working in Toronto, the band Oasis came in and I had quite an encounter with Liam Gallagher (the lead singer). After a brief fight over what music to play, he turned to me and said "you are quite a feisty lady...I like that". When I started my blog in 2009, the incident came to mind and the name stuck.

TYT: You've been a chef now for 16 years. What would you tell someone who wants to quit their job and become a chef?

FC: Be prepared to work. It isn't at all like TV...it's stinky, dirty and sometimes very degrading. Before doing anything, check out a "real" restaurant kitchen for a few nights to see what it is like. Better to do your homework before, than quit and hate it after.

TYT: Tell us a bit about your monthly "family dinners." I love the concept of gathering people from the community around big long tables (it's very in line with The Yellow Table philosophy)!

FC: The TIBS Family Dinners came about a year ago. The owners of Two If By Sea Cafe in Dartmouth and I thought it would be cool to host dinners in their space after hours. Each month, I come up with a menu that uses all local and seasonal food, we sell seats (45 max), and I do all the food except dessert (I am horrible at pastries). It is a true family affair–my husband helps, as does Alexis (one owner's wife), and our friends. It is a great community gathering, bringing together people from around the neighborhood and city and seating them together.

TYT: How has having two little kids affected your cooking style?

FC: My food has become simpler, less constructed. Gone are the "fine dining" days and now it is all about bringing out the most [flavor] in the amazing ingredients we have here in Nova Scotia.

TYT: What are five ingredients you always have in your pantry?

TYT: What would you make tonight if you had to throw an impromptu dinner party for 8?

FC: It is Fall and the leaves are starting to change color. I'd make something warm and fuzzy...roasted squash salad with pumpkin seeds and walnut oil, and shaved Old Growler Gouda. Roasted pork leg with crackling, Brussels sprouts with bacon, beets and yellow beans. For dessert, salt roasted pears with caramel.

TYT: You teach cooking classes as well–what's a cooking tip you like to share with your students?

FC: Keep it simple! Go into your kitchen with confidence and take some chances, but keep it simple.

1 bunch dill about to seed

Sterilize the jars and tops and set aside. Make the brine by combining the ingredients and bringing to a boil; set aside. Place the washed cucumbers in the jars, making sure to get as many shoved in there as humanly possible. Don’t be scared to use a little muscle. Add 3 cloves of garlic and a few sprigs of the dill to each jar. Cover with the brine, seal, and process in simmering water for 13-15 minutes.

We ate our first jar after a week and they were great. If you have more will power than us, you could probably leave them for a little longer to maximize the flavour. Enjoy. And remember, you will always be loved if you show up with a jar of homemade pickles! 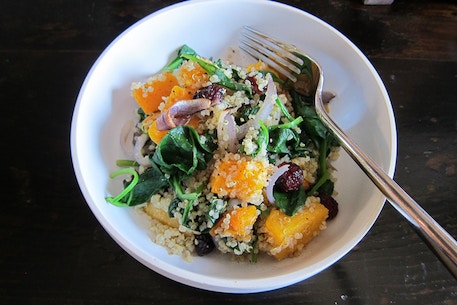 I'll be honest: a few years ago I had never even heard of quinoa. I've loved couscous for years, but quinoa wasn't on my radar until recently. Now this fluffy grain seems to be everywhere, touted as a "super-food" and praised for its nine essential amino acids and high protein content. It's also gluten-free, which is great news for people who have gluten allergies. I finally broke down and bought some a few months ago and, even though it takes a bit longer to cook than couscous (15 minutes... 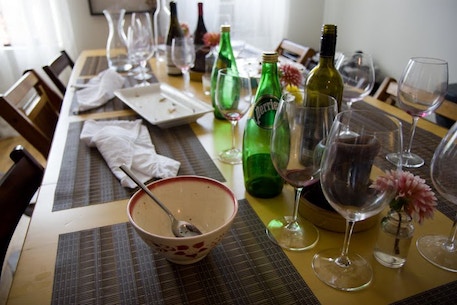 I woke up this morning to piles of dishes, empty wine bottles, and stacks of crusty pots and pans. The glorious aftermath of a dinner party. We had our first Moth-inspired storytelling dinner last night, and among the ten of us gathered around the table, the stories were legendary. We heard tales of ghosts, near-arrests, nightmare first dates, and an attempted arranged marriage. Everyone had such a good time–we were still sipping wine and lingering over dessert long after midnight. But more on...