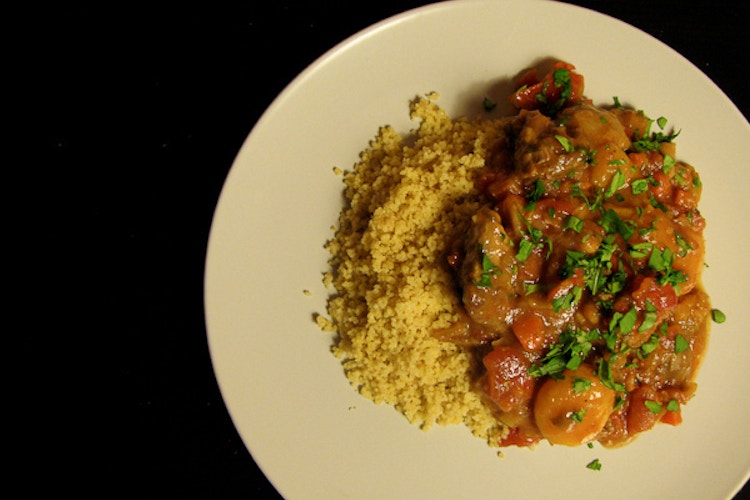 Yes, it's Halloween. And you're probably more concerned with throwing together a last-minute costume than planning what's for dinner. I, however, am thinking about what I want simmering in my Le Creuset on this chilly evening. Something warm, nourishing (to prevent candy-induced sugar crashes), and substantial enough to offer a plate to friends stopping by. And if possible, easy to assemble. A fragrant, savory-sweet lamb tagine seems just the thing.

I sampled my first tagine years ago in Paris at a dimly lit Moroccan restaurant called Le Souk. Seated on pillows around low-lying tables, we dished fragrant stews from cone-shaped earthenware dishes (also called tagines) onto mounds of fluffy couscous. The seductive blend of spices (cinnamon, ginger, nutmeg, cumin, cardamom) and the unique blend of flavors (duck with fig, lamb with almonds and apricot, chicken with preserved lemon and green olives) were a revelation to my Westernized palate. I immediately wanted to recreate these sensual stews at home, and thus began a series of trial tagines and subsequently festive dinner parties.

I've since learned a few things about tagine-making and it turns out they might just be the perfect dinner party food. Why? One, they actually taste better a day or two after you make them, so you can make the whole thing in advance. Two, they feed a crowd–the recipe below easily feeds six (with leftovers) and doubled feeds 12. Three, they're cheap to make–one recipe costs about $20. As a rule, tagines combine cheaper cuts of meat (such as lamb shoulder or chicken thighs) with spices, nuts, and dried fruits, slowly cooking the mixture until the meat becomes fork-tender and a rich, aromatic sauce develops. Bright herb garnishes like fresh mint and cilantro add a dash of color and awaken the palate.

Should you choose to serve tagine for a dinner party–or an impromptu Halloween gathering–here's your game plan: Just before guests arrive, reheat your tagine over medium heat, make some couscous (5 minutes) and toss together a simple arugula salad with some thinly sliced red onion, oranges, and feta (10 minutes) in a citrus vinaigrette. Light a bunch of votive candles, pour some wine, and voila–simple entertaining at its best!

Why I Love Fall in NYC

This was one of those weeks where I was reminded why I love living in NYC. It's fall, the days are cooler, the leaves are changing, and the city is bursting with energy. Working in the food and travel industry, I get invited to some pretty cool events. Though I've never done a "Week in Review" post, I had too many delicious experiences this week not to share. One of these was the chance to taste real jasmine tea at Megu, made by pouring hot water of a dried jasmine flour. Amazing! They gave me... 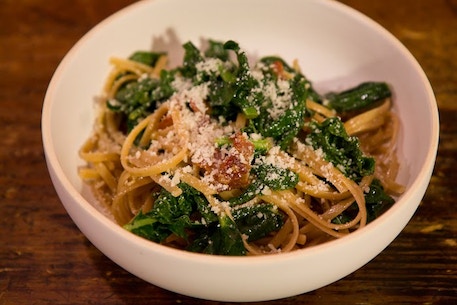 It's been an exciting week so far. First of all, I got to spend the weekend visiting with my family in Fredericksburg, Virginia and Washington, D.C. Sadly I missed the big snow in NYC (!!) but still got plenty of cold, drizzly weather–enough to wear a scarf and hat and wish desperately for a fireplace. Second, The Yellow Table was featured on Gourmet Live as their Food Blog of the Week!! I am so honored, and excited that more people are getting the chance to read the blog. And last, but...