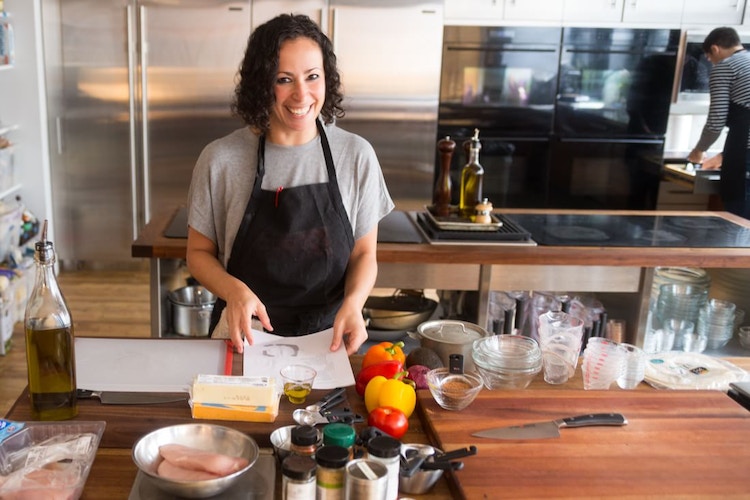 In the Kitchen With: Farideh Sadeghin, Saveur's Test Kitchen Director

Happy Monday friends! I'm excited to announce a new column on the blog: "In the Kitchen With." Over the coming months, I'll be hanging out in the kitchen with some of my favorite chefs, bakers, cookbook authors, food bloggers, magazine editors, etc. and learning the tricks of their trades. In each post, I'll be sharing behind-the-scenes photos, cooking tips, and a new recipe. I'm pumped to have the chance to meet some of my food heroes, and excited to share each experience with you all!

Recently, I had the chance to spend an afternoon in the test kitchens of Saveur magazine, with their Test Kitchen Director, Farideh Sadeghin. This was especially fun for me because: a) I love Saveur. b) Their test kitchen is absolutely dreamy (as you can see in the pictures). And c) now that I write a Dinner Party column for Saveur, I was especially curious to see where my recipes were tested and shot. 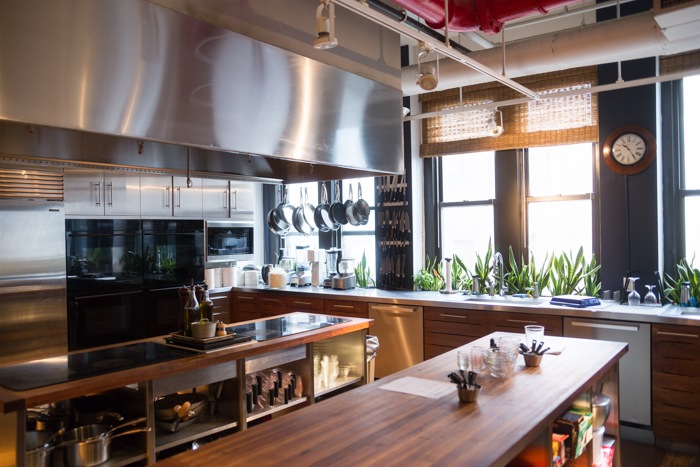 I met Farideh last month out in Sonoma, on a press trip with a bunch of NYC editors/writers, and we hit it off right away. I asked her a zillion questions about her job while we were on the trip, because it's pretty amazing. Basically, she's in charge of testing all the recipes in the magazine – as well as for the website – and developing new ones, plus some writing, food-styling, and shooting. She also cooks for special events in Saveur's private dining room that overlooks the test kitchen. There is a small team of food editors and recipe tester who do recipe testing as well, plus a staff photographer who shoots most of the recipes in-house. 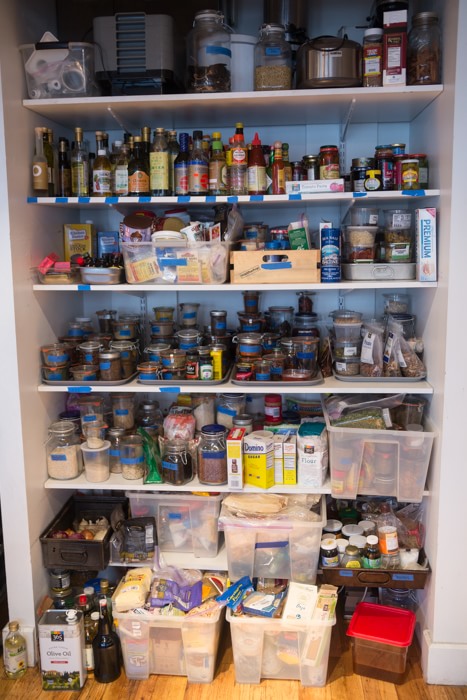 After 2 1/2 years at Saveur, Farideh absolutely loves her job. Her favorite part? "Seeing the recipes come together from start to finish. It's cool seeing them come together from the inception to the final product," she says. She also loves the variety of the work – rather than simply recipe-testing all the time, she also gets to write, style, and sometimes even shoot. She writes a weekly column ("Simple Weeknight Meals") for the website, where she develops new recipes and gets to style and shoot them.

Farideh's path to running Saveur's test kitchen isn't exactly traditional, which is precisely why I find it inspiring. After college, she moved to New Zealand – not to cook, originally, but to kayak. However, she needed a job and was interested in food, so she started working in the kitchen of Milano, a restaurant near Lake Taupo. She eventually became Sous Chef at the prestigious Huka Lodge, where she cooked for 2 years. After 7 years in New Zealand, Farideh decided it was time to move closer to home, and headed to NYC. 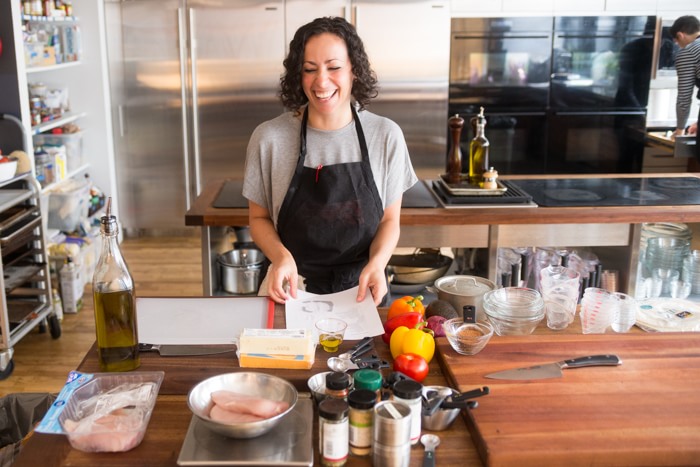 She got a job at Saveur in November 2012 as a test kitchen intern. She interned for 5 months, and then continued working for them on a freelance basis. In August 2013, she was offered the job of Test Kitchen Director – which was her dream from the time she started.

The day I came in, Farideh was testing and shooting her Simple Weeknight Meal column, so I jumped in to help. Lucky me – the recipe was a delicious, 3-cheese chicken quesadilla, which we got to eat for lunch! (And they were really, really good.) She gave me a run-down of the equipment she always keeps out for recipe-testing: measuring spoons and cups, digital scale, small bowls, utensils, a timer, a red pen, and the recipe. Most recipes are tested multiple times, so each recipe that's tested has to have a version and date written on the top, along with the initials of the person who tested it.

Farideh loves recipe-testing. "It's really methodical," she says. "I get in the zone and it's relaxing. When I cook in the test kitchen, it's very peaceful and serene. I can kind of just be in my head...I don't even need music." Sometimes the recipes come together easily, but at times, they'll have to test a recipe up to a dozen times, with slight tweaks each time. 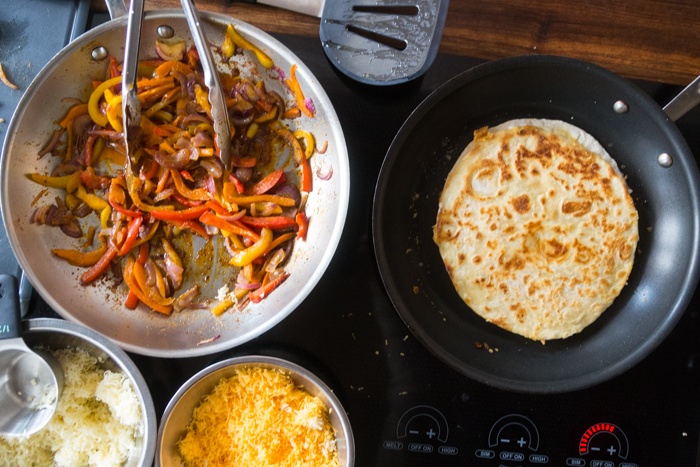 After testing out her quesadilla recipe, I got to help her style it – which was SO much fun given their closets upon closets of props! We selected a board, some little bowls for toppings, and arranged the shot. Farideh shot it (in natural light by the window), and we devoured them immediately afterwards. 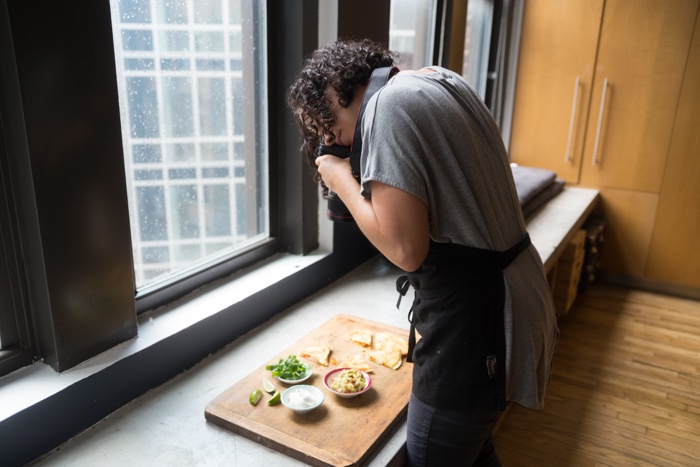 For an easy weeknight meal, check out Farideh's fantastic quesadilla recipe here. I will absolutely be making this at home very, very soon. 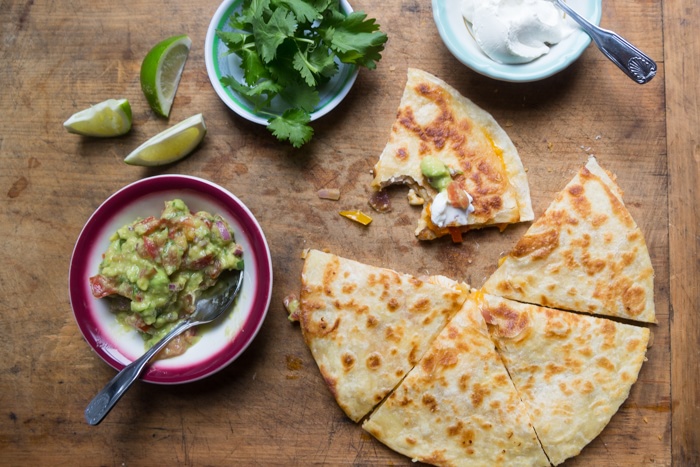 Hope you enjoyed this virtual tour of Saveur! Hanging out there – even just for a few hours – was so fun and so inspiring. After cooking for years in my tiny kitchen, I confess, I did have some major kitchen envy. I told Farideh I'd happily come assist her anytime...hopefully she takes me up on it. 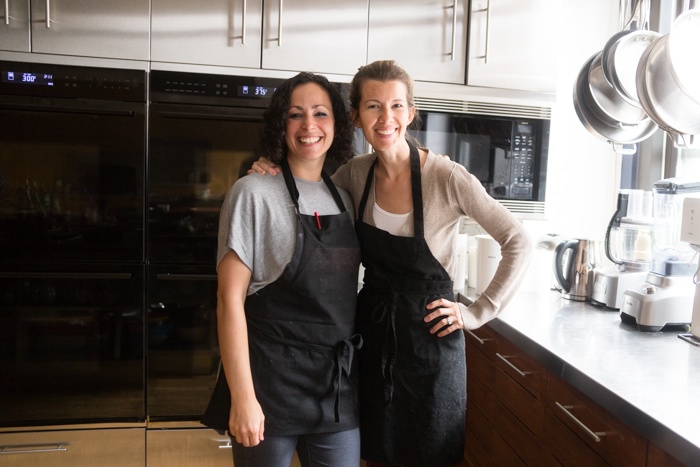 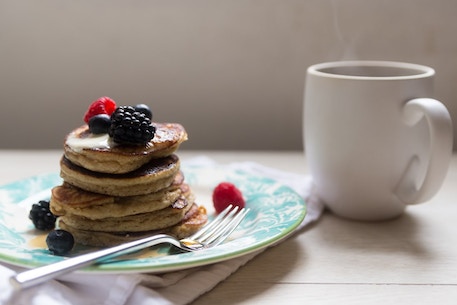 Happy Friday, friends! I don’t know about you, but pancakes are without a doubt my favorite weekend breakfast treat. There’s something so indulgent about a steaming stack of freshly-cooked griddle cakes, dripping with butter and maple syrup. I make different variations depending on the season: pumpkin spice pancakes in the fall, blueberry pancakes in the summer, and buttermilk pecan pancakes year-round. Because they are so decadent, I don’t make pancakes often – but when I do, I enjoy every... 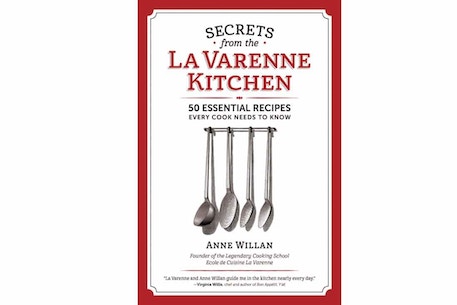 Secrets from the La Varenne Kitchen (A Giveaway!)

It's hard to believe that it's been 9 years since I went to La Varenne, a cooking school formerly in Burgundy, France. I first went in 2006 as a stagiaire (essentially an apprentice), and stayed on several extra months to work as Anne Willan's editorial assistant. I learned so much during my six months there – most notably, a collection of classic French recipes that have served as a foundation in my cooking career ever since. We learned to make stocks (from chicken to beef to fish) and how to...