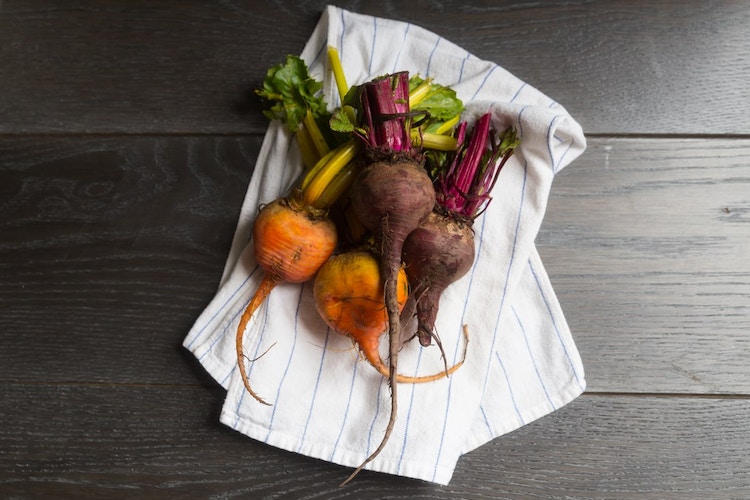 Hi friends! Let me just start by saying that I've LOVED reading all of your fun ideas for workshops, and have gotten so many sweet emails inviting me to your cities! I wonder if Brandon would mind if I was on the road 3 months this time instead of one?! (Just kidding...I already know his answer to that!). But seriously, thanks so much for your enthusiasm and support. It means the world, and I cannot wait to meet as many of you as I can on my book tour this summer!

But now: confession time. I've hated beets my whole life. Despite being a cook and a food writer (which means I'm supposed to eat everything), I've just never been able to get used to the cloyingly sweet, earthy taste of roasted red beets. My mom used to like eating the canned kind. She would serve them, sliced, sitting in its pool of deep red juices, as a side dish with dinner. The smell (and the taste) made my stomach churn, so I refused to eat them.

Eventually, in France, I gave them a second chance. This time, I tried them in a salad – roasted and cubed, with mache, chèvre, and walnuts. The vinaigrette and the goat cheese made the taste slightly more palatable, but I still wasn't a fan of the sweet taste. 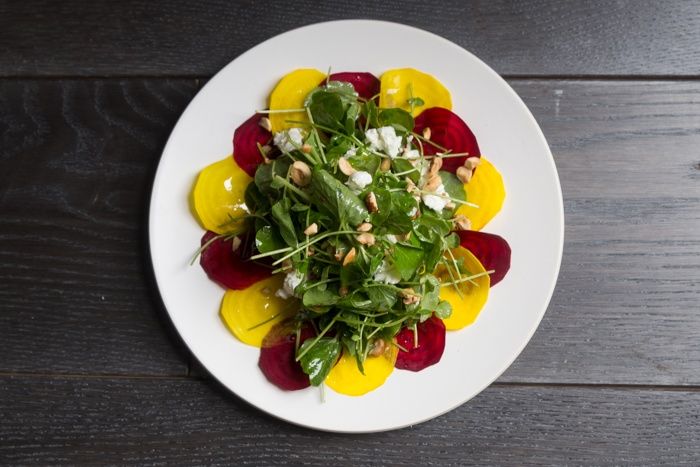 But then, years later, my world changed. I was at a dinner in Napa, and saw on the menu that the starter was a baby greens salad with golden and Chioggia beets. I had no idea what "golden and Chioggia beets" were – I was just planning to push them aside and eat the greens. When the salad was served, I was shocked: the beets were brilliantly colored – half were a rich, mustardy yellow, and the other half were striped red and white, like a candy cane. They weren't cooked, but rather served thinly sliced and raw. The taste was bright and clean, almost like a watermelon radish, but less peppery. They were nothing like the syrupy canned beets of my childhood, or the overpoweringly earthy ones I'd tasted in France. In that moment, beets and I made a truce. 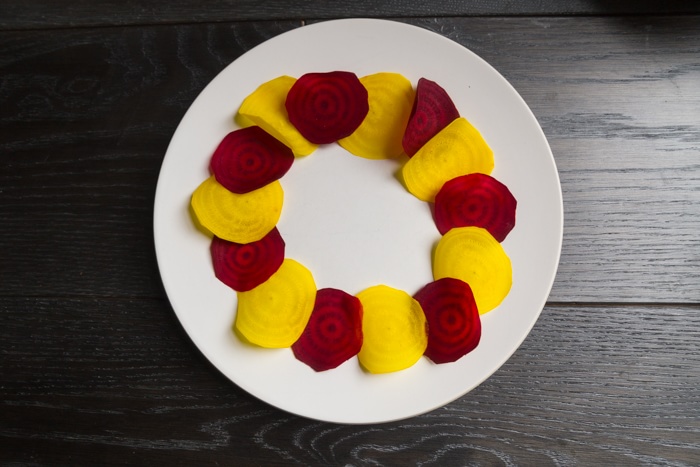 In recently weeks, I've been kind of on a beet kick. For a dinner party in March, I found some beautiful Easter-egg colored baby beets at Eataly and roasted them, peeled them, and cut them into little cubes to serve with a mache salad (with goat cheese and walnuts, similar to the one I'd had in France!). Then, for a dinner party I did recently in Alexandria, VA, I found Chioggia beets (the beautifully striped kind) and golden ones, and decided to recreate the life-changing salad I had tasted in California nearly 10 years ago. 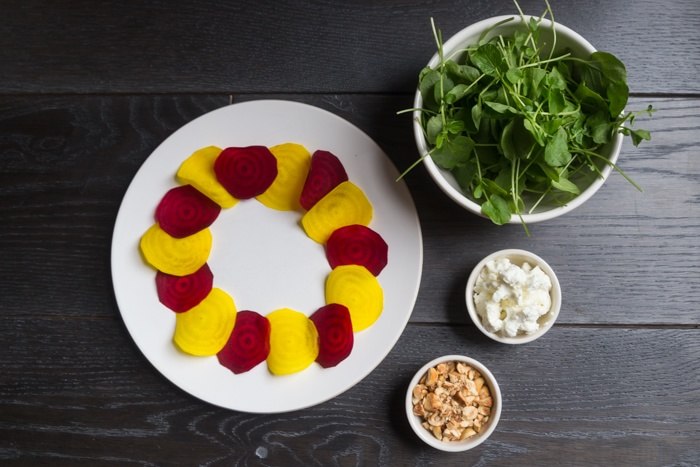 The salad is a little fussy, but it's really a stunner – and I love creating a little drama on the plate every once in awhile! When I photographed this salad the other day, I couldn't find Chioggia beets unfortunately (they're quite hard to find), so I used small red ones instead. I sliced the beets thinly with a mandoline, and created a ring of alternating colors, gold and red. I tossed peppery greens (you could use baby arugula, watercress, or a milder mache) with a white Balsamic vinaigrette, and topped it with crumbled goat cheese, and toasted, chopped hazelnuts. It's so pretty and so delicious – and perfect for spring and summer! 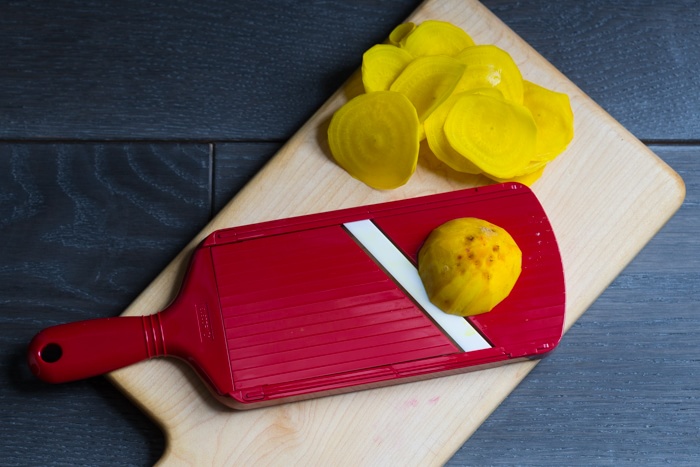 For any other beet-haters out there, give this salad a try and let me know what you think!! Just curious, is there any food that you've hated your whole life and have recently come to love? Tell me your stories in the comments below!

P.S. Speaking of beets, I'm currently experimenting with beet chips! I made some the other day and they were delicious - BUT they shrank quite a bit (as in, they were like postage-stamp size when they came out of the oven) so I need to test them again with bigger beets. Recipe coming soon! 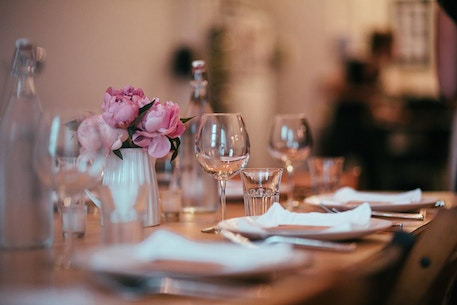 I Have So Much to Tell You!

Happy Monday, friends! I hope you all had a lovely weekend. It's nice to finally feel like Spring is coming to NYC, slowly but surely. The skies are blue today, the temperatures are in the mid-60's, and I think I might go for a jog later. Makes me happy to be alive again, after such a looooong, dreary winter! I'm going to take a break from traditional programming (a.k.a. Monday Musings) because I have so many things to tell/ask you guys!! Sorry for the bullet-points, but it's the easiest way... 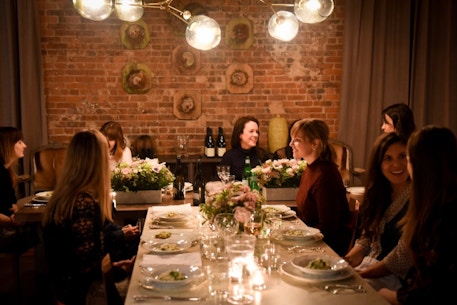 A Spring Dinner Party in Support of Life

Happy Friday, everyone! I’m excited to share some photos with you all – taken by my friend, the talented Sara Beth Turner – from a beautiful spring dinner party I had the privilege of cooking for recently. The hostess, my friend Rebecca Strauser, is a fabulous cook herself, but she was happy to take the evening off to focus on the décor. The setting was absolutely stunning. I mean...the table settings, the flowers, and that lighting fixture (swoon!). It was an all-girls affair, and even though...