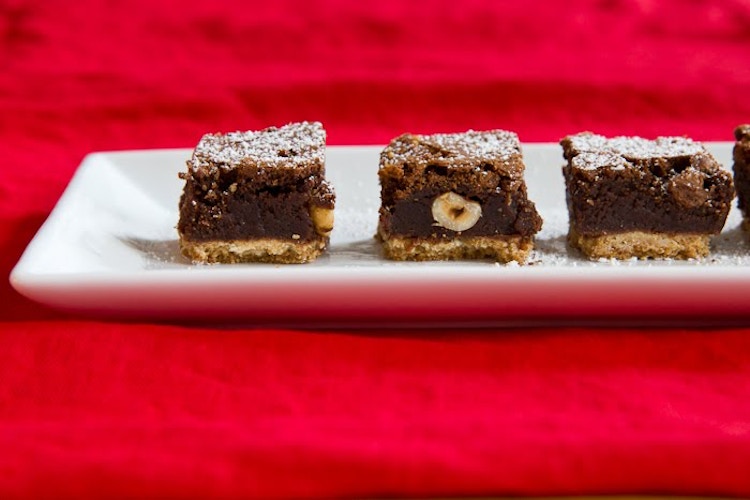 Many years ago, when I was living in Paris and working as a part-time English teacher and part-time nanny, I catered a Christmas party for a Parisian family. The pressure was high, cooking for this group of sophisticated Parisian food-lovers, but I was determined to wow them. Now this crowd, despite the typical French willpower in the face of dessert, loved sweets. In fact, I recall that at least half of the items I made that night contained sugar. They wanted American desserts, so I obliged, with pumpkin cupcakes (and cream-cheese frosting), pecan bars, chocolate chip cookies, and my homage to both France and America, these decadent little Nutella shortbread brownies.

Now the guests at this party may have been a tad skeptical at first, upon hearing about the young American cook, but by the time they had tasted the Nutella brownies, all doubts had turned to bliss. I was swarmed with admirers (of the brownies): "Qu'est-ce que c'est?" (What is it?!) "C'est une reve!" (It's a dream!) "Elles sont magiques... superbes... ravissantes!!" (They're magic... superb... delightful!) I have never heard a more appreciative crowd than these French party-goers post-dessert. Perhaps they were just in a sugar coma (or maybe it was the Champagne talking), but after such an enthusiastic response, I've been making these hazelnut brownie bars ever since.

These are actually inspired by a recipe for Fudgy Brownie Bars I discovered on Epicurious.com years ago. I've changed the recipe a good bit, adding Nutella and vanilla, reducing the sugar by half a cup, and adding in whole roasted hazelnuts. I also swapped out salted butter for unsalted in the shortbread base, and I love the salty-sweet contrast. The result is a crisp shortbread base and a decadent, fudge-like Nutella brownie topping. In other words: heaven!

If there's one thing you bake this holiday season, I'd strongly recommend these show-stoppers. Yes, the butter content is alarmingly high. Yes, they take over 30 minutes to make. And yes, they probably have a zillion calories. But you will be hard pressed to find a more crowd-pleasing confection. Cut them into bite-size pieces for a party, or make a batch and freeze half for a snowy day. They also make fabulous holiday hostess gifts, packaged in a cellophane bag and tied with a pretty ribbon. Happy baking! 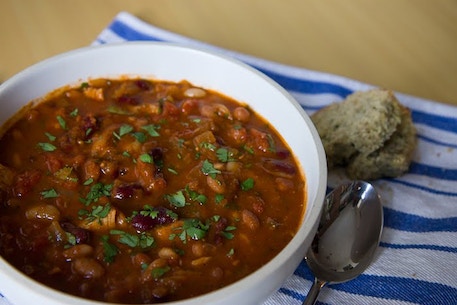 I hope everyone had a marvelous Thanksgiving! Several of you wrote me and told me you brined a turkey for the first time...congrats!! That's really exciting. I ended up brining my turkey again this year (thankfully without any of the disasters of last year) and it was so deliciously moist and flavorful. I am officially a brining convert. (By the way, this post is about chili, I promise–but we have to relive Thanksgiving first! Bear with me...) The yellow table was packed to capacity (it fits... 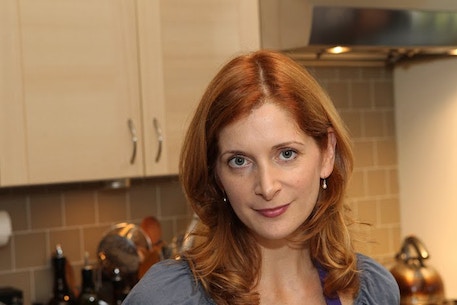 If you've ever read Melissa Clark's "A Good Appetite" column in the New York Times (which I do, religiously)–or thumbed through any of her 32 cookbooks–then you know that she's a terrific cook and a captivating writer. She's also hilarious. Reading her stories over the years–of running a catering business out of her fifth floor walk-up apartment, of her childhood brush with vegetarianism (it never quite stuck), or the whiskey-soaked chocolate cake that earned her major cool points in high...