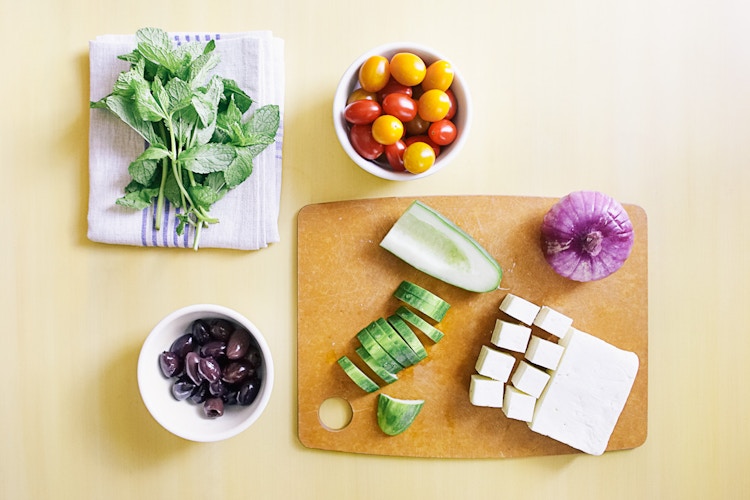 I went to Greece for the first – and only – time when I was 21. I was studying abroad in Paris at the time, and after finding a cheap ticket to Athens, I decided to backpack around the Greek Isles with a college friend. Despite the intense heat and the $10-per-night accommodations, the trip was spectacular. I'll always remember the brilliant blues and whites of Santorini, with its jumble of whitewashed houses, winding alleyways, and stray cats. There were so many memories that stand out from that week: the black sand beaches of Perissa, the incredible sunsets in Oia, zipping around Santorini by motorbike, and snapping secret photos of Greek orthodox priests sipping espresso and smoking cigarettes outside a church. I remember flower-strewn streets on Paros, deserted beaches on Mykanos, and seeing the Acropolis gleaming above Athens, while eating dinner at a slanted table on a sharply sloping street below. It seemed that everyone was in good spirits (perhaps in large part due to the seemingly endless shots of ouzo offered everywhere we went!).

But when I think of this trip, what I remember most of all were the simple Greek salads I ate every day. 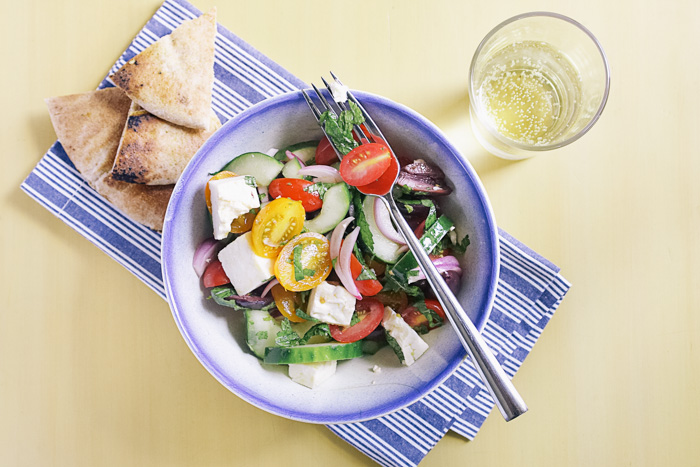 The salad made an impression on me for many reasons. For one, it was the first time I'd ever eaten a salad without lettuce. The Greek version had chunks of cucumbers and tomatoes, sliced red onions (and usually green peppers), and olives, topped with a rectangle of feta. The salad was sprinkled with a generous pinch of dried oregano, a bit of salt and pepper, and drizzled with red wine vinegar and really good extra virgin olive oil. Simple, but so profoundly good.

Secondly, I never knew that feta existed in any form besides the crumbled version found on salad bars in the U.S. The salty, tangy block feta found in Greece was unlike anything I'd ever tasted. In fact all of the ingredients were unlike anything I'd ever tasted. Each one was so fresh, any of them could have been eaten alone and still been delicious.

Twelve years later, I'm still a big fan of this salad. I've tweaked the recipe a bit to suit my tastes - I've swapped cherry tomatoes for whole (though either way is good), gotten rid of the green pepper (which I don't really like), and added fresh mint in lieu of dried oregano. Sometimes I toss this salad with chilled quinoa or farro or Israeli couscous, to make a heartier main dish salad. I make this all the time in the summer, as a side salad with grilled chicken or fish, or as a light lunch with some toasted pita bread. I'd love to go back to Greece one of these days, but for now, I'm content to enjoy a taste of it at home. 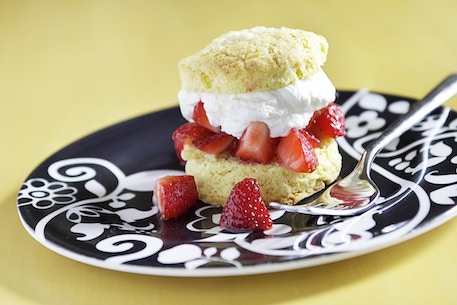 Photos by Signe Birck I've always had a thing for strawberries. My mom has a framed picture of 4-year-old me, wearing a little white dress and standing beside a gigantic bowl strawberries at a friend's wedding reception. I have a deer-in-the-headlights look on my face, with a red-stained mouth and hands full of strawberries. Caught in the act! Growing up, strawberries were a big deal in my family. The third weekend of every May, my family drove to my mom's tiny hometown of Adairville, KY to...

Photos by Signe Birck I really can't believe August is almost over. Is it just me, or has summer flown by?! The past few weeks have been a blur of travel, writing, and cooking. I was recently in Virginia for a very cool Anthology magazine shoot (more on that later!), then on a road trip to Nashville with my sister Maria – she's getting married in a few months (!!) so we had bridal showers to throw, dress fittings, and lots of wedding planning to do. While in Music City, I had a chance to catch...