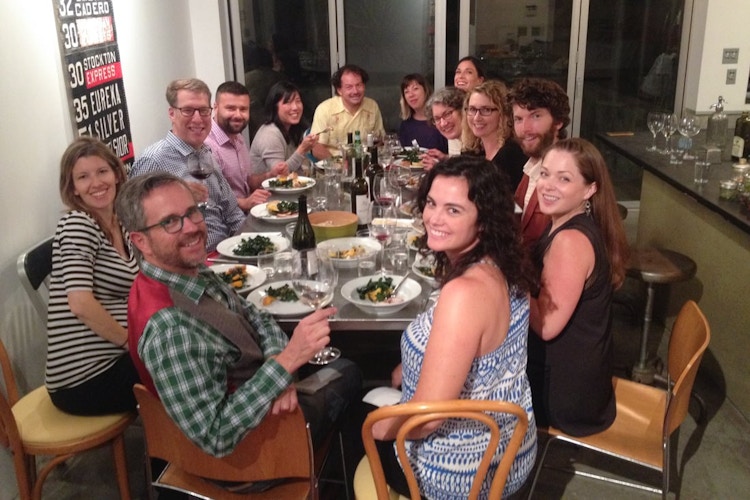 After 7 flights, 5 cities, and 3 weeks on the road, I'm finally back home in Brooklyn. Sorry for the lack of blog posts lately...between the move and the book tour and freelance work (not to mention pregnancy fatigue!), it's been all I could do just to keep up. Last week, B and I met up in Traverse City for a much-needed little anniversary trip/babymoon. It was so relaxing and rejuvenating...just what we needed after a busy summer and an even busier fall.

But now that I'm home, I have SO much to tell you!! More updates to come in future posts, but for now, I'm so excited to tell you all about two things (that happen to be related): an awesome Kickstarter project + details from a fun farm-to-table dinner party I recently co-hosted in San Francisco in collaboration with my friend Leslie (more on her shortly), my brother Davis, and my friend Lindsay Hoopes, of Hoopes Vineyard. 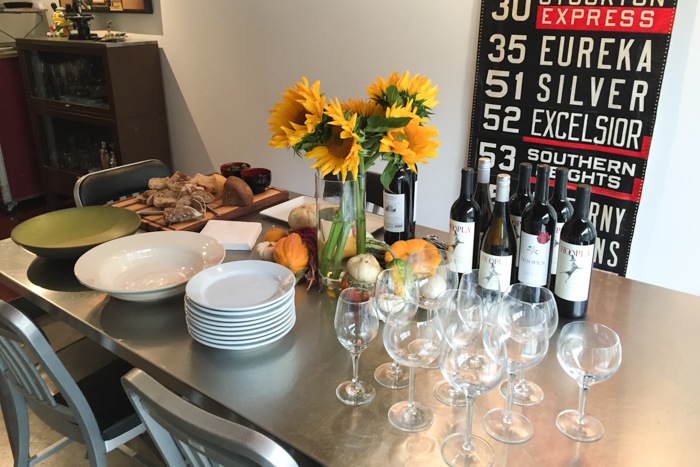 First the Kickstarter. Last year, my friend Allison connected me with her friend Leslie Jonath, a dynamo of a woman with a passion for food, people, and books. She lives in San Francisco, is always juggling 10 zillion projects, and loves to throw dinner parties – the bigger, the better. (Obviously I wanted to be her friend immediately.) Leslie has one of the biggest hearts of anyone I've ever met, and has the spunk and energy of a teenager. After 18 years as a Creative Director at Chronicle Books, she left to start her own media and book packaging company, Connected Dots Media. She's been creating beautiful books, videos, and other media content since, and absolutely loves it.

Leslie and I had several phone chats last year as I was working on my cookbook and – even before we met in person – I was amazed by her desire to help me in any way she could. Then she uttered the magic words: "If you're ever in San Francisco, let me know – I'd love to throw a dinner party and introduce you to some of my friends." Um...yes, please!! I filed that comment away in my memory, and felt certain that one day we would, indeed, throw a dinner party together. 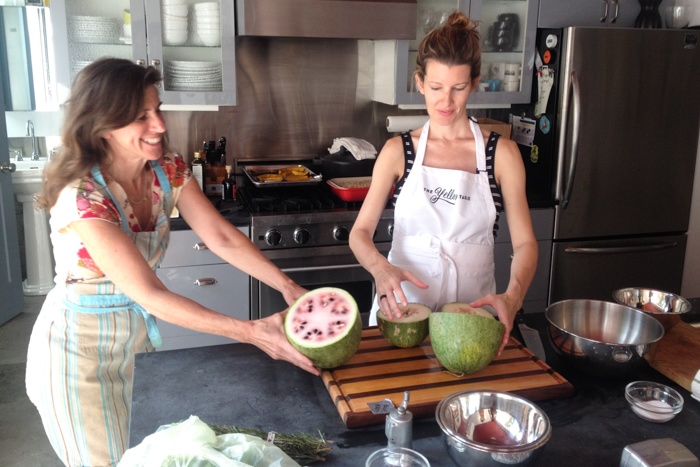 Earlier this summer, we finally had a chance to meet in NYC, and she told me that she was working on her own cookbook, and that she was planning to fundraise on Kickstarter. I was happy to pass along tips from my my own experience. Her Kickstarter launched earlier this month and I could not be more excited about this project! Titled Feed Your People: Big Batch Recipes by Bighearted Cooks, Leslie's book is all about how to host community events and cook for large group gatherings. Inspired by the Vodka & Latke party she throws every December (that started out small and grew to over 100 guests), she realized that people need help throwing an event for a huge crowd.

Though there are lots of cookbooks that focus on entertaining, there aren't many with recipes that can scale to feed 20, 40, or even more people. (Think: block parties, pig roasts, bake sales, and other community events.) So she reached out to some of her favorite cooks and chefs and asked them to send her their favorite recipes to feed a crowd, along with stories from some of their own favorite large gatherings. The recipes will all be thoroughly tested, and beautifully photographed, plus she's got an awesome team (publisher/editor/designer) lined up to create a top-notch book. BUT they need to raise $35K in order to make this happen. She's already raised $21K, but she needs to raise an additional $14K in the next 8 days in order to reach her funding goal. Let's help make this book a reality!! 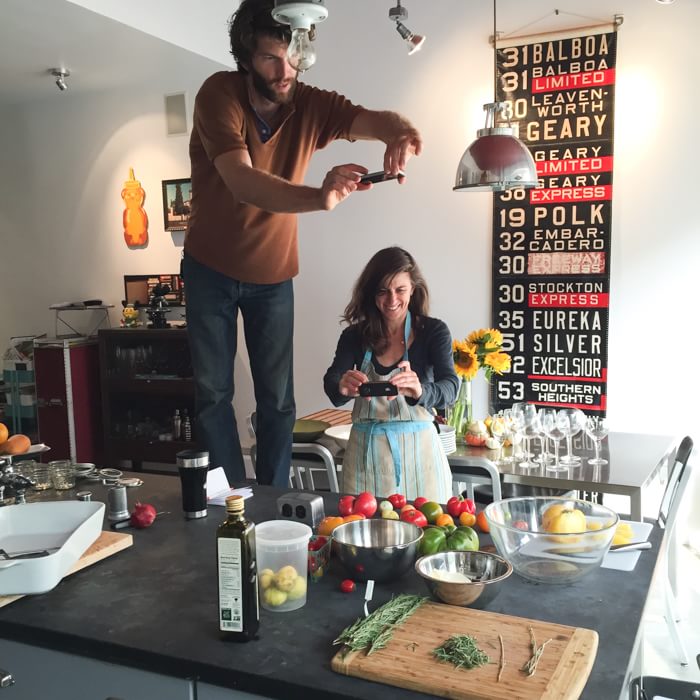 Please take a look at her video and consider backing this project. A $40 pledge will give you a pre-release hardcover copy of the book – which I think you'll really love. And please feel free to share this link with your friends!!

Now for the dinner party...

As soon as I knew that I was coming to San Francisco during my book tour, I reached out to Leslie about doing a dinner, and her answer was a resounding YES! She said we could have the dinner at her house, and that she'd invite a bunch of friends (nearly all who work in food or media in some capacity), and told me I should invite some of my friends as well. I said I'd do the cooking, and conveniently, my brother Davis (who runs an organic farm in Malibu) was going to be in the area after attending the national Heirloom Expo in Santa Rosa. To my amazement, he arrived with a Jeep-full of gorgeous heirloom vegetables and fruits from the expo...as in, varieties of melons, squash, tomatoes, cucumbers, peppers, and other crazy vegetables that I'd never seen in my life.

Here are just a few things he brought.... 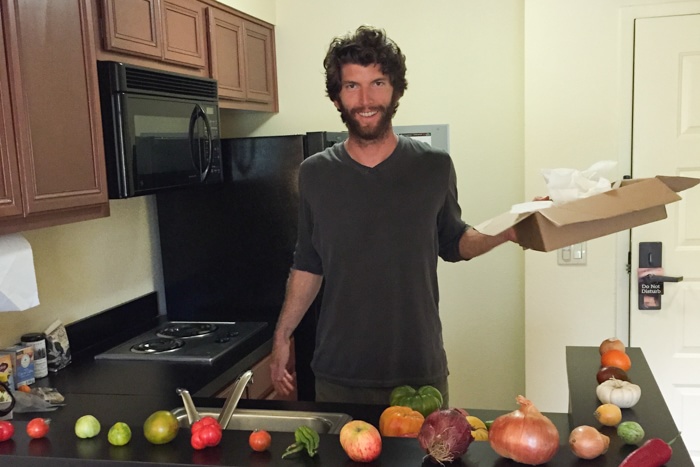 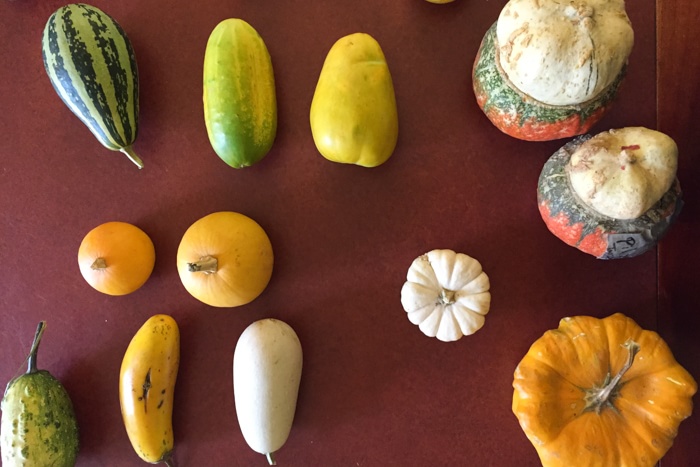 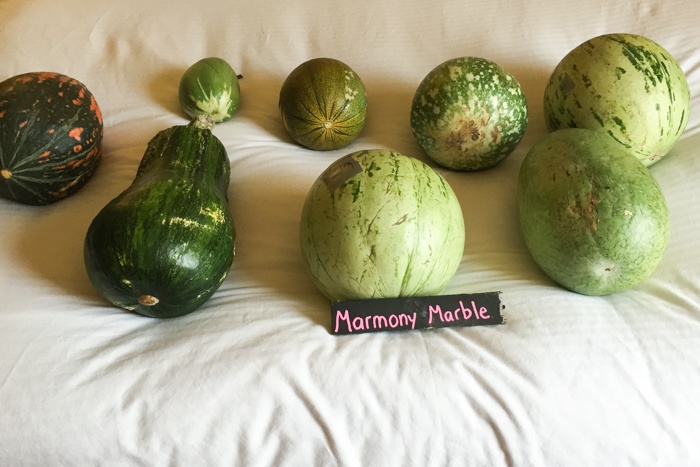 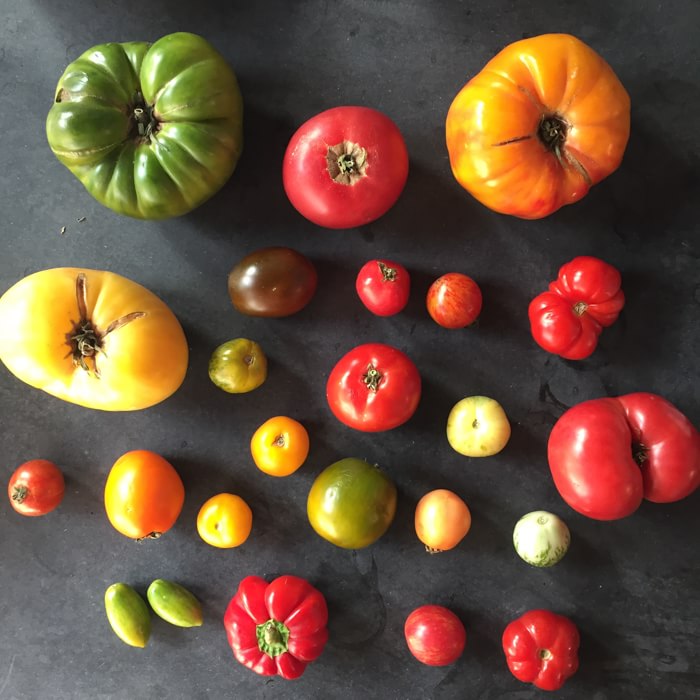 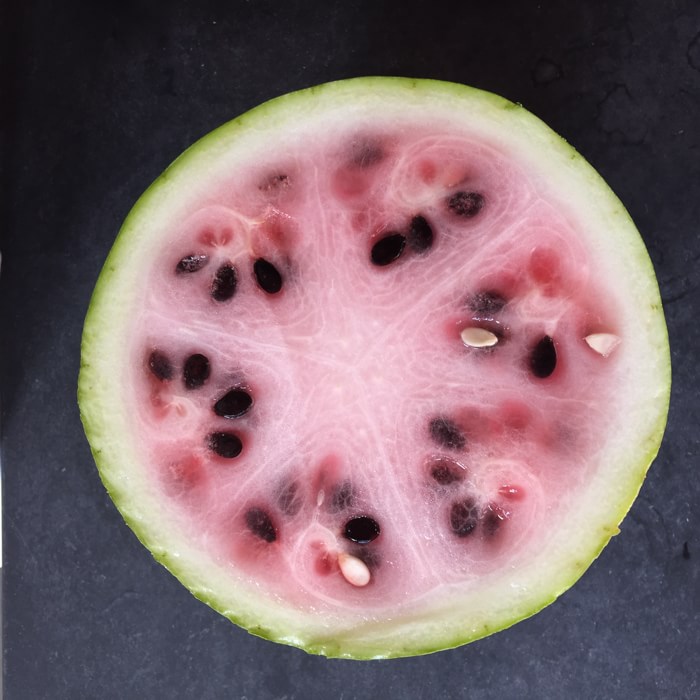 I planned the menu around the produce he brought in order to take advantage of the incredible late summer/early fall bounty. And Lindsay Hoopes, of Hoopes Vineyard, sent a selection of her fabulous wines to pair with the various dishes. To supplement all the produce Davis brought, Leslie and I went shopping at Bi-Rite Market, THE most adorable little farm-sourced artisanal grocery store in San Francisco's Mission District. Leslie lives like 5 minutes away, so this was actually super-convenient. I was in heaven picking out flowers, cheeses, figs, bread, and other goodies for the evening. 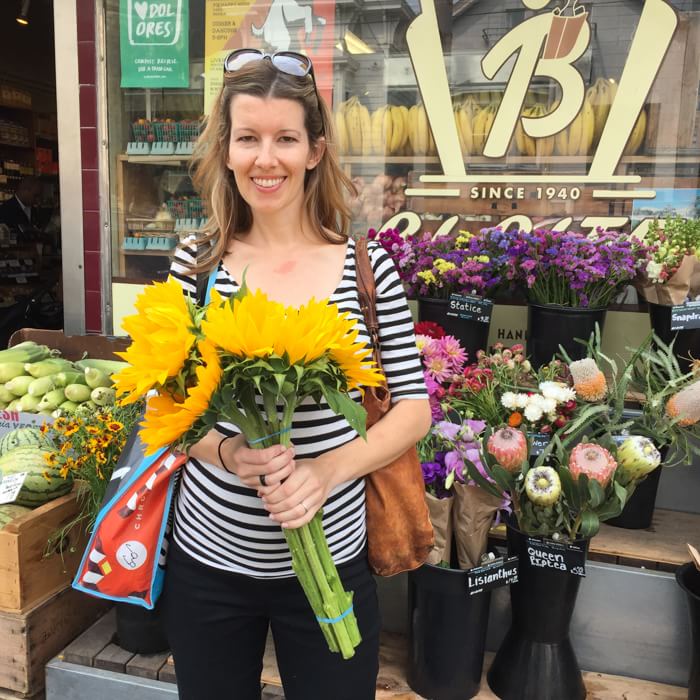 Leslie and I spent the afternoon cooking (in, I might add, her incredible kitchen), while Davis set about preserving seeds from every single fruit and vegetable I cut into, so he could grow these plants in his own garden next season. It was so cool knowing that this dinner was part of a cycle that would continue to grow next year and in the years to come. 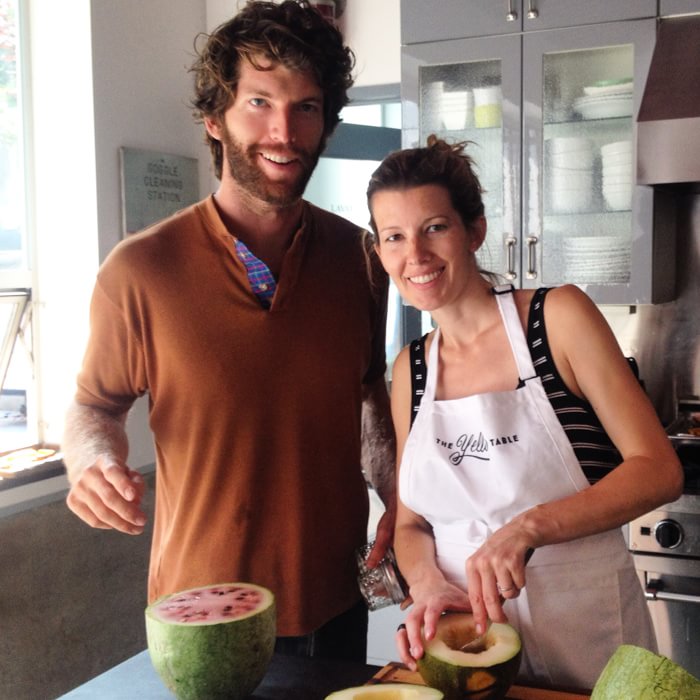 Pre-dinner, I made a buffet spread of some cheeses and olives, an heirloom tomato salad with mozzarella and basil, and a salad with a bunch of beautiful melon and watermelon varieties, with feta and mint. (I cannot tell you how delicious these tomatoes and melons were compared to anything I've ever tasted before. It was like a whole other level of flavor.) Stephanie, from Hoopes Vineyard, poured the creamy, single-vineyard 2014 Hoopes Chardonnay, as well as the zippy, unoaked Hoopla Chardonnay to pair with the appetizers. 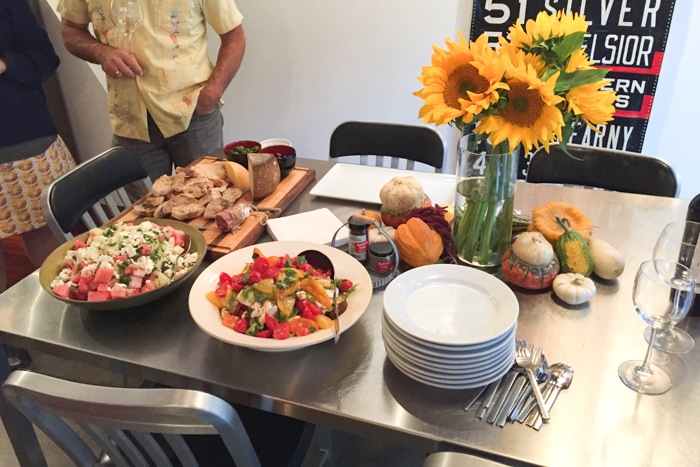 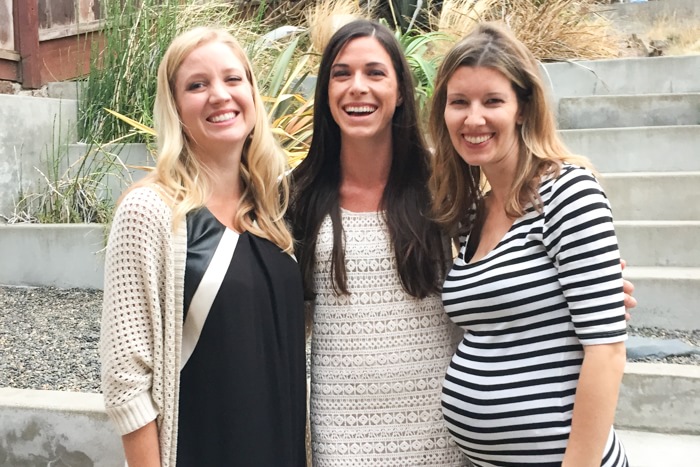 For the main course, I made my favorite roasted pork loin stuffed with prosciutto and rosemary fig butter (the recipe is in The Yellow Table Cookbook!), along with a fall kale salad with roasted butternut squash, shaved Parmesan, and pomegranate seeds. The stuffed pork and roasted squash paired perfectly with some of the elegant, cassis-and-leather-scented 2012 Hoopes Oakville Cabernet and the brand new 2012 Hoopes Napa Valley Cabernet (blended with just a touch of merlot). We also sampled their everyday (and more affordable) Hoopla "The Mutt" Cabernet blend. These fantastic Napa Valley reds were an ideal companion to the rustic fall fare. 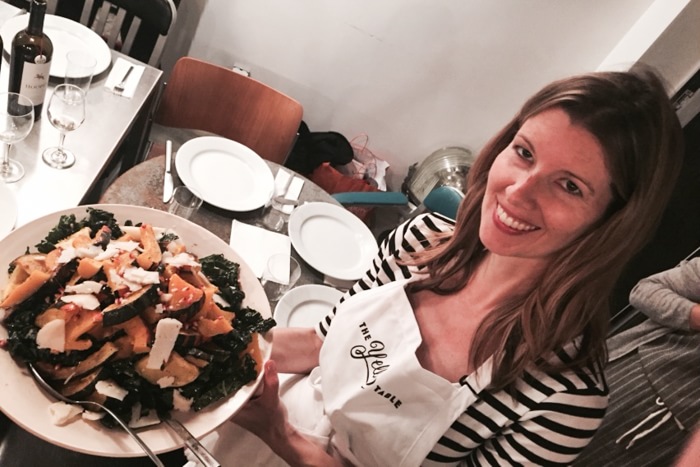 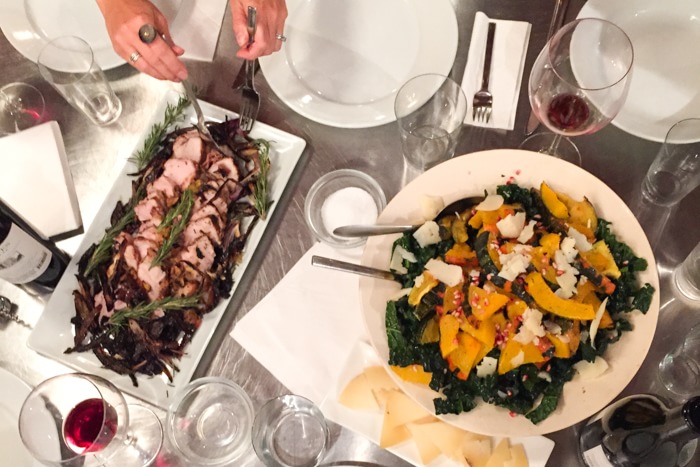 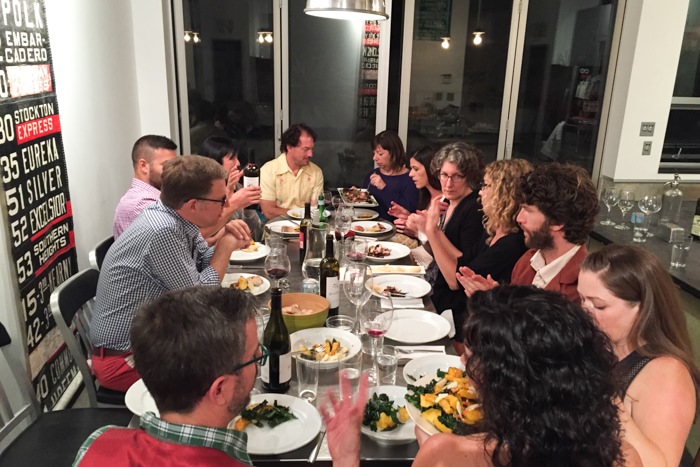 For dessert – because Davis had just been blackberry-picking, I made a nectarine blackberry pecan crumble with vanilla ice cream. Over dessert, I shared a bit about my Yellow Table cookbook journey, and Leslie shared details about her upcoming book and Kickstarter campaign.

It was such a wonderful evening for so many reasons. It was such a privilege to partner with Leslie – someone whose vision for community around the table so closely mirrors my own – on this dinner party, and it was a total dream come true to share my brother's heirloom produce, and Lindsay Hoopes's fantastic wines (which just happened to be yet another "local" addition to the meal). And last, but certainly not least, I couldn't have asked for a more dynamic, creative, warm group of people. Though I started the evening not knowing most of the people there, I left with hugs and new friendships. I suppose that's the power of "Feeding Your People."

[9/11 UPDATE: We have two winners! Scroll down to the bottom to see who won!] Hi friends! I can't believe a month has passed since my last post...I have so many things to tell you all. Between being pregnant, moving apartments (after five years!), and kicking off my book tour, it's been a time of intense transition. Frankly, I've been a bit overwhelmed by it all, and am just starting to process how I feel. Stay tuned for next week's Monday Musings post. Bring a cup of coffee, and we will have... 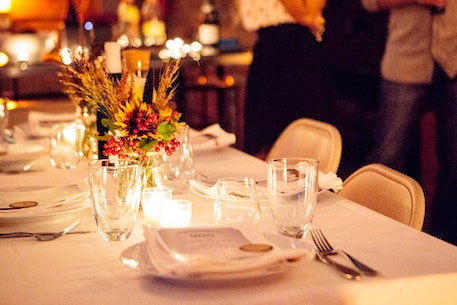 UPDATE: I'm extending the $500 gift card giveaway two more days! I'm going to send out my Supper Club newsletter Wednesday morning at 9 a.m. EST, and will announce the winner then! To kick off the fall – and the first weekend of October! – I'm thrilled to share photos from our first official Yellow Table Supper Club! As I announced a few weeks ago, I'm launching a monthly supper club in partnership with Whole Foods Market, and I'd LOVE for all of you to join. All you have to do invite 6-8...