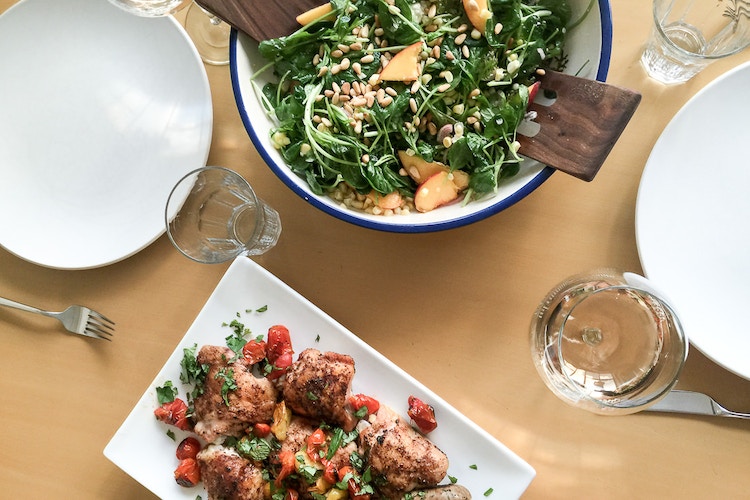 Happy Monday, everyone! I know it's been awhile. Miss Evie has been on a bit of a nap boycott lately, which means that I don’t get a lot done during the day besides chasing her around the house – she’s now crawling and pulling up on everything – and trying to prevent her from chewing on computer cords, laptops, glasses, books, and other non-baby-friendly items. She is officially on the move. (And this mama is tired!)

So first things first: for those of you who entered my Modern Potluck giveaway, thank you for your patience. The winner is (drumroll please): Lisa Watznauer, from New Jersey! Her favorite potluck dish is: “My take on mac ‘n cheese: rigatoni shape pasta, extra-sharp cheddar and a crunchy browned bread crumb topping.” YUM. Congrats, Lisa! You’ll be receiving a copy of Modern Potluck, plus a 1.5 quart red Corningware clay oblong baking dish. Just email me your address and your goodies will be on their way...

I’ve been thinking a lot lately about gathering people around the table, and how that looks post-baby. The Kitchn asked me to write a couple posts on this subject for them, which I’ll share with you as soon as they are live. It's a topic that's very dear to my heart so it's been fun to explore.

Getting to the point where I’ve been up to hosting dinner parties again has been a process. In the early weeks of Evie’s life, I was so sleep-deprived and overwhelmed, I literally thought I’d never cook a meal again, much less host a party. Gradually, as we got her into more of a routine, and as she (and I!) began sleeping more, I realized that throwing dinner parties is definitely possible, only with adjusted expectations. I have to remind myself that the house doesn’t have to be perfect, the meal can be really simple, and that it's OK to invite just 4 friends over instead of 10. And if people offer to bring something, the answer is a definite YES.

The main issue is that Evie’s 7 PM bedtime lands right around the time when our dinner parties generally start. And what used to be my pre-party hour to prep food and set the table, is now spent feeding, bathing, and putting Evie to bed. Which means I need to have everything done almost totally in advance – which has been a huge (but good) challenge for me.

Of course, it’s not the end of the world if I don’t have the table already set, or the meal entirely prepared the moment everyone arrives. There’s nothing like a baby to set you straight on what’s really important, and at this point in my life, having Instagrammable table décor or a magazine-worthy spread of food isn’t my top priority. What is important is having friends over and spending time connecting over a meal. And having a sense of humor during those frustrating "I can't do it all" moments where your only option is to laugh or cry.

Case in point. A few weeks ago, I invited our good friends Eric and Amy and their 3-year-old daughter Parker over for an early dinner. They were just days away from having baby #2, and this was going to be our last chance to all hang out for awhile. I told them dinner was at 6 PM, thinking that Parker and Evie could just eat with us at the table. (How idyllic of me!) I had every intention of having dinner ready when they arrived so we could eat and get the kids to bed at a reasonable hour. Alas, it was one of those days, and despite my best intentions, I had only managed to get the chicken out of the refrigerator and to turn on the oven by the time they came over.

Luckily, they are good enough friends not to care, so I handed Evie to Amy, and she sat on the rug with the girls while they played, and the guys chatted over beers. I rubbed olive oil and Merkén (my favorite Chilean spice blend of smoked aji chili, coriander, and salt – thank you Liz Caskey!) on some chicken thighs and threw them in the oven to roast, along with some grape tomatoes. I tossed together a salad of arugula, quickly pickled shallots, sliced peaches, raw corn, and goat cheese and quickly set the table. By 6:45, we were all at the table, and I was secretly congratulating myself for managing to have friends over, babies and all.

Then, all of a sudden, the screaming commenced.

Evie is normally a pretty relaxed kid, and loves to eat, but this particular night, she just wasn’t having it. She scrunched up her face and let out a wail from her high chair, big, fat tears rolling down her face. I picked her up and excused myself, telling everyone to please go ahead and eat. I took Evie back to her room and checked her diaper. Her poor little bottom was flaming red – she had her first really bad diaper rash. I cleaned her off and she screamed in pain. I managed to put on a little diaper rash cream and a clean diaper, and went in to get some advice from Amy, who has been down the mom road a few more years than me. She suggested putting some coconut oil on the rash and letting her bum air out a bit. I did what she suggested, which seemed to soothe Evie a bit, and brought her back to the table, diaper-free and wrapped toga-style in a light blanket. B had already eaten, so I handed her to him and began eating my dinner.

Moments later, B yelled in surprise and jumped up from the table, holding Evie out at arm’s length. The blanket was soaking wet. She had peed all over the blanket, and onto his shorts as well. We all burst out laughing – how could we not?? It was such a picture of how life had changed – an attempted early dinner served late, baby screaming, diaper rash, and finally a blanket-wrapped-diaperless-Evie peeing on Brandon at the table. You just can’t make this stuff up. And yet, in spite of it all, we had a great time. The dinner was certainly memorable. The food was good (I hope!), but what really mattered was the sense of community and camaraderie. And the knowledge that, as friends, we were all in this together.

I just wanted to share this funny story to encourage you all, no matter what stage of life you're in: don’t let perfect be the enemy of the good. Have friends over. Even though life is messy and chaotic. They’ll love you even if the house isn't clean or if you order takeout pizza for dinner. The fact that you made the time is what matters. For those of you with kids, I'd love to hear your stories and tips on how YOU still manage to have dinner parties...I still have so much to learn.

In the meantime, here are two easy dinner party recipes that have been go-to's for me this summer (though the peaches and corn are just about out of season, so hurry!).

Now that I’m a mom, I’ve learned firsthand what many of you all have known for a long time: entertaining with a baby is a challenge. Not an insurmountable one, but nonetheless, it’s hard. During those early months, getting a meal prepared felt darn near impossible, much less cleaning the apartment and setting the table for guests. Now that Evie is a little older, I’m back to throwing dinner parties, but they’re more laid-back affairs, and most importantly, my expectations have shifted. I no... 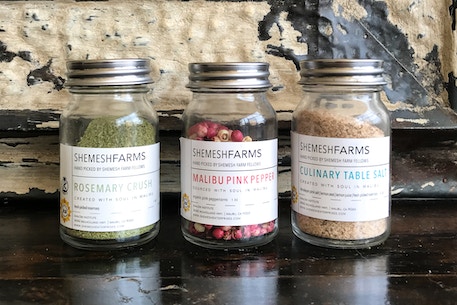 Hi friends! It’s been awhile since I’ve blogged (more on that later), but I could not be any more excited to be back AND to tell you all about Shemesh Farms, an incredible new line of farm-to-jar culinary seasonings created by my brother Davis and a very special group of young people in Southern California. Not only are these products beyond delicious (I’ve been using them on everything recently, from grilled fish to burgers, salads, roasted vegetables, and even popcorn!), but I especially love...