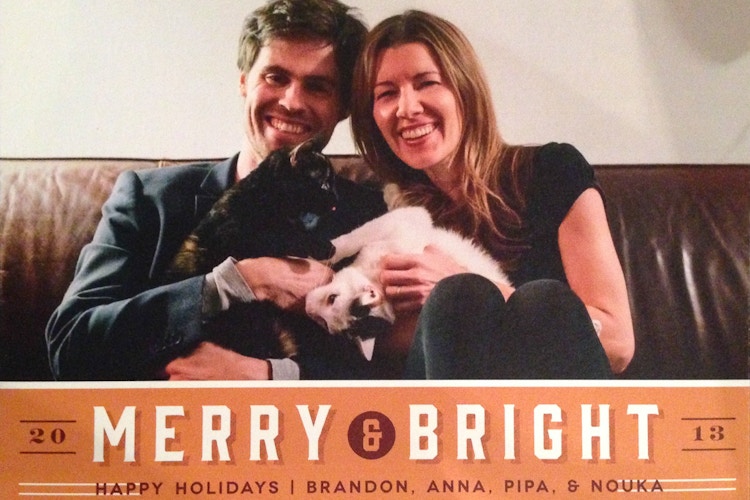 After four Christmases married to Brandon, this is the first year we've actually had Christmas cards made. You know those perfect cards you get where everyone looks airbrushed, wearing their best clothes and their best smiles, with pets and kids that actually sit still? The ones you're already received because they were mailed on December 5? Well, this is not that card. Ours turned out dark and grainy, with goofy expressions on both our faces, and two in-motion cats. Oh, and lest you start wondering why you haven't gotten one yet – I haven't mailed them yet.

Every year, I vow to send out Christmas cards. One year we even had a picture taken with the intent to make it into a Christmas card (see here) but never got around to having cards printed. But this year was different. I was determined. Because we're masochists, we decided to take the picture with our cats, which is about as difficult as you might imagine. Signe snapped the picture for us on Thanksgiving night and then I ordered the cards a few days later. I was so on the ball (or so I thought...). 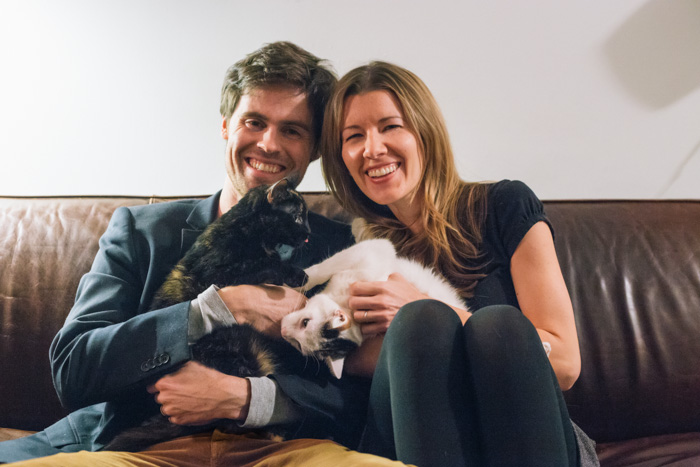 The original picture...still unclear how our card turned out so dark and grainy!

I got the pictures back a week or so later, only to discover that the picture – which was originally pretty cute – was suddenly so dark and shadowy that you can't see half of Brandon's face! I called Minted to tell them what had happened and to ask about getting the card reprinted. They cheerily said they'd be able to offer me a 50% discount on reprinting. Wait. I have to pay for their mistake? (Answer: yes.) I was so irked, given the cards weren't exactly cheap in the first place, that I declined their reprinting discount and for the next 3 weeks did...nothing. I just wasn't able to mail them looking like this.

But this weekend, after taking another look at the pile of cards waiting to be written and mailed, I just laughed. The cards are actually pretty hilarious – even in their dark, grainy state. And they're just so fitting for us. Christmas cards often convey this false image that people have it all together and the fact of the matter is, we don't! We're messy, flawed, broken people – but we're also incredibly blessed. I feel so grateful to be married to someone I love so much (and vice versa). Someone who knows my flaws and weaknesses and loves all of me. Someone who likes being goofy (we may or may not meow to our cats) and who's as authentic as they come. And I love that in this picture – as our cats are doing somersaults – we're really laughing. It's real life, in all of its imperfect glory. 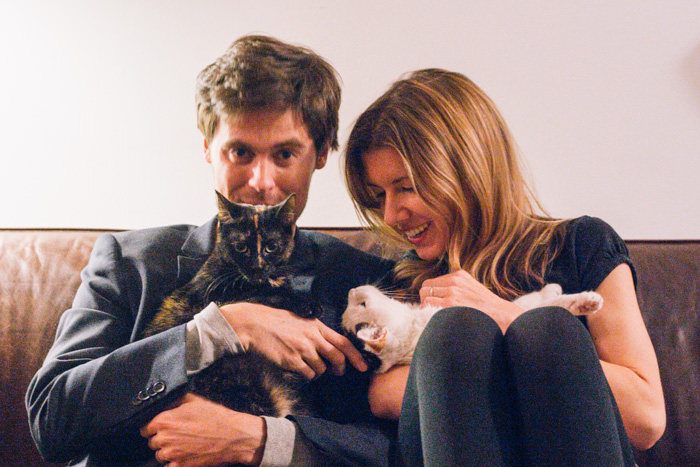 If you're feeling the burden of perfection today – to send out those cards, to finish shopping, wrapping, baking, or whatever else you're doing – just take a minute to breathe. Ask yourself why you're doing what you're doing. Does it all have to be done? The most important thing about this season is spending it with those you love. Perfection is a joy-robber. I've found that embracing "good-enough" is a great antidote to those unrealistic expectations I place on myself. This card was a perfect reminder for me. Here's to getting them in the mail before Christmas... 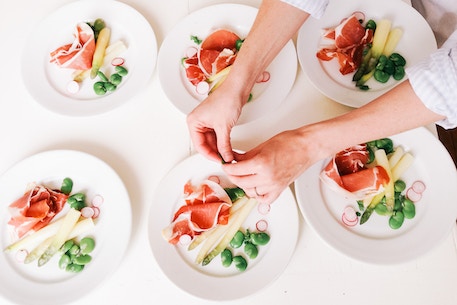 Happy Friday everyone!! I know everyone's crazy busy getting ready for the holidays, but I have a favor to ask of you. Go out and buy the January 2014 issue of Food & Wine. It's on the newsstands now, and there's a very special story inside about two of my favorite people: Marjorie Taylor and Kendall Smith Franchini, the talented mother-daughter duo behind The Cook's Atelier, in Beaune, France. So why is this story so exciting? For one, I wrote it! Writing for Food & Wine has been a... 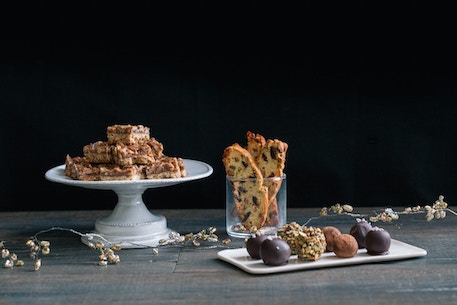 Day 45: 'Twas the Night Before Christmas

Happy Christmas Eve! Brandon and I flew into Nashville last night, and are spending the next few days with my parents and my brother. As much as I love NYC, it's so nice to be with family for the holidays. Last night we sat by a roaring fire (perhaps my favorite part about being home!), decorated the Christmas tree, and looked at my sister's wedding pictures. This morning we had a leisurely breakfast, listened to Christmas music, and watched the snow flurries outside. It's been fantastic. But...