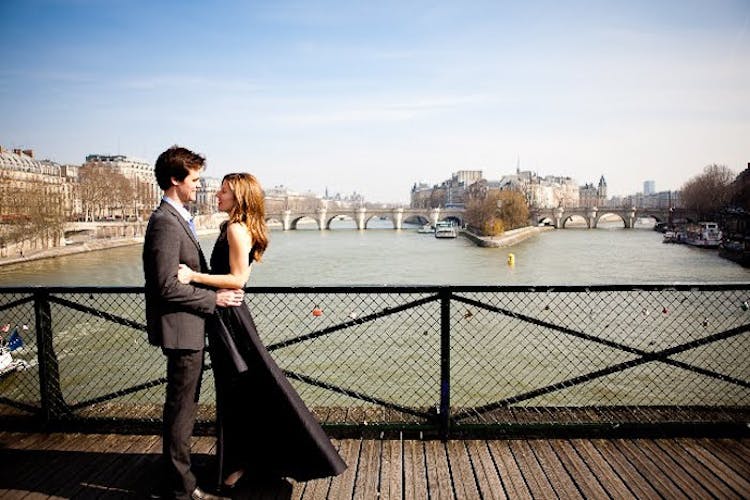 There are few things in life I love more than a good story. My favorite saying as a child was "You never know what a day will bring." That expression continues to influence my life, giving me a sense of hope and excitement about what each day might hold. I don't ever want to lose that sense of wonder. I feel so privileged to be a part of a story that is so immense and so beautiful, written by a far greater storyteller than me.

Two years ago today–on March 11, 2010–the greatest story of my life unfolded in an utterly surprising and beautiful way. For those of you who already know this story, forgive me for retelling it. For those of you who haven't heard it, be encouraged: dreams absolutely can and do come true. The story involves my favorite place (Paris), my favorite person (Brandon), a gorgeous dress, a scavenger hunt, a bunch of red roses, a bridge, and a ring. Fairy tell stuff, right?

The story took place on my 30th birthday. I was working for the French Tourist Office at the time, a job that involved frequent travel to France (rough, I know...!). Lucky for me, I had a business trip that was scheduled a few days after my birthday so the lightbulb went off in my head: why not avoid all the angst surrounding turning 30 and celebrate in Paris? I got the green light from my boss to move up my ticket a few days and then presented the idea to Brandon. We had been dating for nearly two years at this point and had been to Paris once together already. He loved the idea and said it would actually work out perfectly because he needed to go to London on business. He said he'd see if he could arrange his trip for the few days before my birthday and just take the train over to Paris to meet me. Perfect!

I proceeded to make all the plans (as I love to do): booked a hotel, made dinner reservations, made plans with my Parisian friends. Little did I know that Brandon was making plans of his own...

He gave me a present and a card before he left and told me not to open it until I landed in Paris, the morning of my birthday. I loved that I had a surprise to look forward to when I landed. A few days later, I landed and groggily opened my card. It said "Happy Birthday Love! Today is a big day and I want you to use your gift to document our big adventure." (Big adventure?! What did he have in mind??) The card continued: "Your driver will be downstairs to meet you. See you later today!" ?! What?? Driver?? Oh my gosh. I opened the present and it was a little handheld video camera that just said "Push Play." I did, and there was a little message from Brandon, telling me he loved me and that I should use this to document my special day. I burst into tears...how in the world had he planned all of this? And what did he have in store?

My head was buzzing with ideas and thoughts and excitement. Could he possibly be... No, no, no I told myself. He's not proposing. We had definitely talked about marriage and knew we wanted to one day, but I knew he hadn't talked to my dad yet and we had a trip planned to visit my parents the following month. So I put all engagement thoughts aside and decided to just focus on this elaborate birthday surprise he had in store.

I headed down to get my luggage, and sure enough, there was a driver with a little Mlle WATSON sign waiting for me. It was all completely surreal. I hopped in the car, and off we went! I had no idea where we were headed and the driver said he wasn't allowed to tell me! I settled back for 45 minutes until we began winding our way through the narrow streets of Paris. We finally ended up in the Marais and pulled up in front of the adorable Hotel du Petit Moulin (a place I had been dying to visit for years!).

The hotel staff whisked away my luggage and took me up to my room. The rest of the story is recorded in this amazing video, filmed and edited by Victor Paguia. (Who, I later found out, Brandon had flown over to secretly document the whole story! His then-girlfriend, now fiancee, Becky Shim took the beautiful pictures.)

All in all, this was–aside from my wedding day–the most magical day of my life. The video still brings tears to my eyes. That this amazing man loved me enough not only to want to spend the rest of his life with me, but that he knew me well enough to want to give me a great story.

One other little detail that the video doesn't share was that Brandon had, in fact already talked to my parents. While I was traveling for work that January, he had secretly flown down to Nashville to talk to my parents and ask their blessing. They gave it readily, and kept it all a secret for six weeks until we were engaged. So the whole day when I was going on this amazing scavenger hunt (to all my favorite spots in Paris!) I kept telling myself, don't expect a proposal, don't expect a proposal...

Of course the story is only beginning. Six months after our Parisian engagement we were married in NYC (that deserves a post of its own one day...!) And today, two years later, I am even more in love with this man than I ever thought possible. I am one very, very blessed woman. If you take away one thing from this story, I hope it's this: "You never know what a day will bring!" 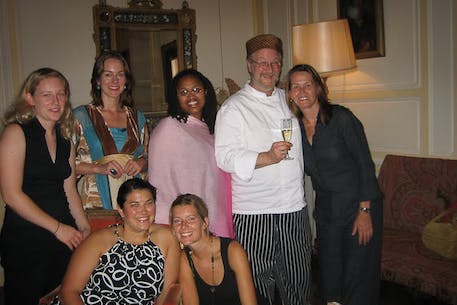 To say Chef Randall Price has led a fascinating life would be an understatement. This incredibly talented chef, writer, and teacher has cooked for presidents, diplomats, and royalty – in embassies, chateaux, and restaurants – and has written a book and a comic book series about (some of) his experiences. American-born, Randall has lived in France for 26 years, and he can thank Eagle Brand condensed milk for getting him over there for the first time (read on for details). I had the privilege of... 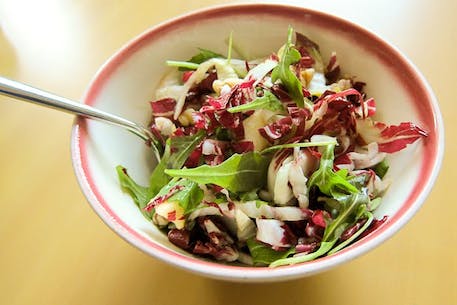 Not that we've had much of a winter this year (I haven't had to wear my fur boots once!), but there are still certain winter foods that I love. Warming soups and stews, hearty pasta dishes, braised pork over creamy polenta, roasted veggies, and homemade chicken pot pies. But alongside these wintry comfort foods, I like to serve a light, colorful, citrusy salad. A sort of palate cleanser, if you will, to cut through the richness of the main dish. In the summer, I practically live off salads, but...