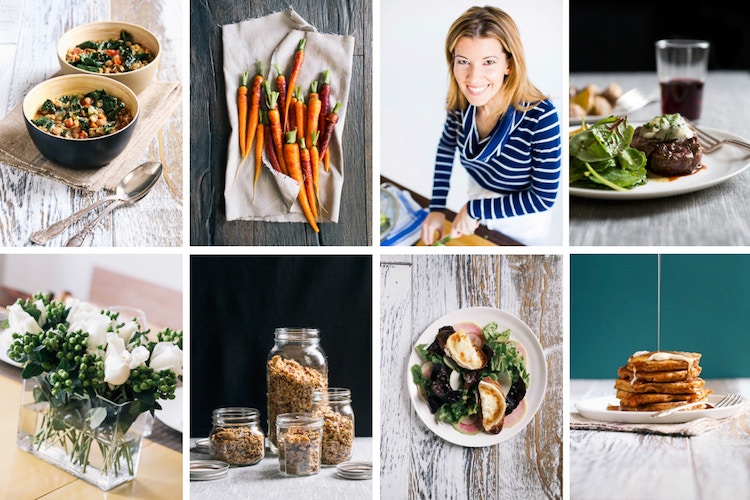 Good morning, friends! So much is happening right now it sort of makes my head spin. Things have been so busy lately – between having three sets of friends in town back-to-back, throwing a string of cookbook-related dinner parties, working on the actual book, filming a video, and planning my June road trip (more on that soon!) – that it's been hard to keep up with emails and phone calls and blog posts, much less carving out time to rest, or to be with Brandon. And then there's the crushing guilt I feel for not being able to invest in friendships the way I'd like. I'm trying to remind myself that this is just a season.

It's funny how, when things get this busy, I crave normalcy...an ordinary day of work followed by dinner at home and maybe an episode of Brooklyn Nine-Nine. (Yes, I totally love that show.) Or lazy Sundays spent reading the New York Times and drinking coffee before heading to church. And yet, during the many stretches of these ordinary times in our marriage, where B's health forced us to retreat, or when career opportunities were less, I longed for the excitement and energy of the phase I'm in right now. I'm reminded again and again of the importance of savoring each phase of life, because we can be sure that at some point it will change.

Sara of Sprouted Kitchen wrote a lovely blog post the other day about the "in-between" times in life. The everydayness that accounts for most of our lives is actually so full of meaning and beauty in and of itself, if we take the time to appreciate it. So even when I'm desperately wanting to "push pause" on life right now and retreat back to more ordinary times, I'm trying to stay hyper-cognizant of how blessed I am to get the chance to pursue a dream, and to see this cookbook come to life. I want to make sure – even amidst the craziness – to savor every moment, because life will take a turn back to the mundane soon enough. Which will be beautiful in its own way. 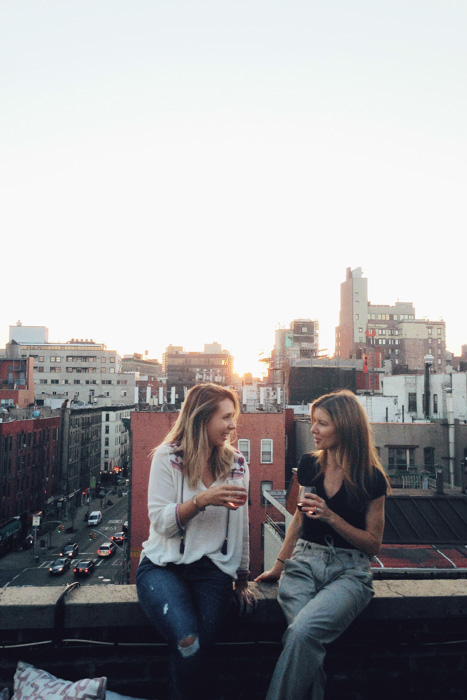 So with that said, I have some exciting news on the cookbook-front: we've hired a designer! You all were amazing - when I posted that I was looking for a designer, I received a flood of responses. In the end, I chose Katie King Rumford, a talented designer from California who's spent the past year living in Bombay, India. I love her crisp, clean design and excellent font choices, her illustrations and hand-lettering skills, and her MFA Thesis (which involved creating a cooking app and a beautiful cookbook, among other things) blew me out of the water. But once I talked to her, and heard her passion for food, for cooking, and for gathering people around the table, I realized that she was more than just a great designer, she was a kindred spirit. AND, of all crazy things, she and her husband are moving to NYC this summer, so we will be able to finish up the book designs in the same city. So thrilled to have Katie on board.

And secondly, we've found an editor! Lauren Salkeld is a senior-level editor, writer, cook, and recipe-testing expert who spent the past 8 years working for Epicurious.com, and before that, at Bon Appetit. In addition to editing thousands of recipes and stories for print and web, she's worked on several cookbooks and brings a huge amount of food expertise to the project. Also, as a note to all of you patient recipe-testers, Lauren is taking over the recipe-testing aspect of the book. She'll be reaching out to you all in the coming weeks with recipes and testing instructions. Many apologies for the insane delay on sending out recipes – I bit off way more than I could chew, and I am certain that Lauren's recipe-editing (and organizational!) skills will help whip this project into shape! 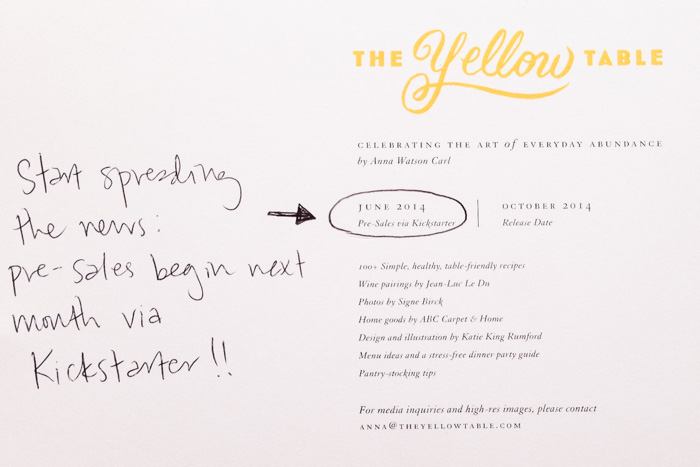 This is the back of a "cookbook teaser" card Katie designed for the ABC Dinner; the front of the card = the collage up top.

And lastly, you can pre-order a copy of the book starting in June! The books will be released this fall, but we're fundraising via Kickstarter next month. Meaning, you'll have the chance to pledge $30 to pre-buy a copy of the book, which you'll then receive in October (in time for the holidays!). Self-publishing a book – especially one printed on really nice paper, with beautiful photography and design – is not cheap, so we're trying to raise enough money to cover the cost of printing the first 3000 copies. My friends Megan and Mike Gilger spent the past few days in NYC helping me shoot my Kickstarter video. They're so talented – I can't wait to see what they come up with. (Check out Megan's recent blog post about their time in NYC.)

So that's all for now...next week I'll have more details surrounding my upcoming road trip and some cool sponsorships and collaborations that are in the works...and how you can get involved! I am so excited to see this cookbook vision come to life, and I couldn't have done it without your support!!

P.S. ABC Carpet & Home ran a story about our dinner party collaboration (+ a Q&A with me) on their blog this week. Check it out here!

(Food photos in opening collage by Signe Birck; portrait of me by Nate Poekert; rooftop photo by Mike Gilger.) 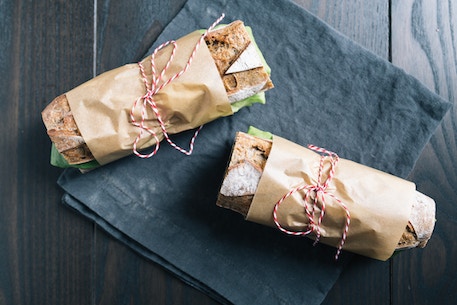 Friday Favorites: A Picnic, A Recipe, and More!

Happy Friday friends!! I don't know about you, but I'm really happy it's the weekend. If I could spend Saturday any way I wanted, I'd sleep in late, have coffee in bed, read a bit, then pack a picnic lunch and walk with B over the Manhattan Bridge to DUMBO for a waterfront picnic. Sounds dreamy, right?! Alas, this weekend is busy busy busy - full of graduations and baby showers and bridal showers and birthday parties and dinner parties and a Sunday video shoot (more on that later!). I'm not... 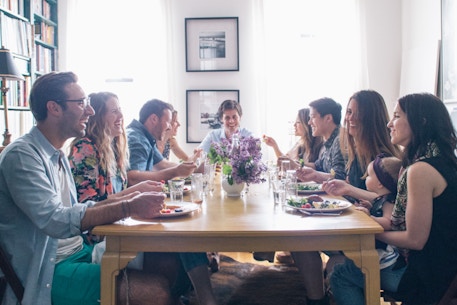 How to Throw a Fabulous (Stress-Free) Brunch

Happy Friday everyone! I don't know about you, but one of my favorite things about the weekend is brunch. I love starting late in the day – noon or 1 is perfect – spending the afternoon hanging out, eating and drinking coffee or bubbly, and then still having your evening free. But going out to brunch in NYC is kind of an ordeal. Nothing about the idea of waiting in line for an hour sounds appealing to me – not to mention paying $18 for an omelette, $5 for a cup of French press coffee, and $12...