This dish was inspired by the cover of the September 2010 issue of Food & Wine.  I remember reading the magazine last August on the train up to Hyde Park and getting so hungry that I decided I had make the cover recipe that night. I bought the ingredients at the Grand Central Market as soon as we got off the train–shrimp, arugula mix, fennel, scallions, and saffron (the rest I had at home)–and rushed home to cook.

As it turned out, I sort of ignored the recipe. Written by a chef (Joshua Hopkins of Abattoir, in Atlanta), the original recipe had some rather involved steps (like making shrimp stock) that in my hungry daze I wasn't up for tackling.  And there was no way I could wait an hour and 15 minutes to eat!  But I love shrimp, and I especially loved the idea of pairing them with creamy saffron rice and a light, summery salad.  So I decided to challenge myself: to make the meal (with a few little shortcuts!) in 30 minutes or less.

Shaving time off was easier than you might think: I bought the shrimp already cleaned (which saved a ton of time), skipped the homemade shrimp stock, sauteed the shrimp in my usual combo of olive oil, garlic, red pepper flakes, and thyme (instead of poaching), and finished cooking the parboiled rice in saffron, half-and-half (instead of cream), and chicken stock.  The salad took just minutes to make–after thinly slicing the fennel and scallions, I tossed them with a bit of arugula and frisee, lemon juice, and olive oil. And as an added heart-healthy bonus, I didn't use any butter at all.

With apologies to Chef Hopkins for taking a few shortcuts, I must say the meal turned out to be delicious. I will definitely make this combination again and again...though probably the 30-minute way. (And if I'm ever in Atlanta, I'll make sure to pay my respects at Abattoir!) 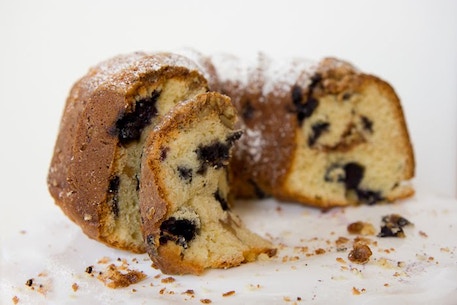 As much as I love a good dessert, I can usually take it or leave it at the end of a meal. Another glass of wine is dessert for me! But breakfast is an entirely different matter. First thing in the morning, I need something sweet with my coffee. Until I've satiated this craving, I can't even look at eggs, bacon, or anything savory. Usually toast and jam does the trick, but sometimes I get a hankering for something homemade...a muffin, a scone, or best of all, a warm piece of coffee cake... 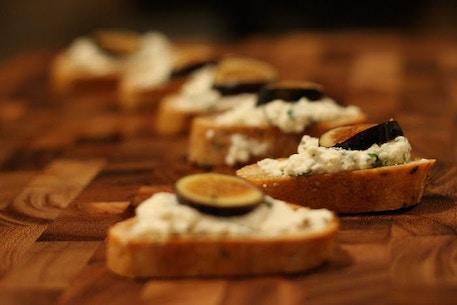 One of my favorite appetizers of all times is Andrew Carmellini's herbed ricotta with grilled crostini at Locanda Verde. Creamy fresh sheep's milk ricotta is whipped together with milk, seasoned with sea salt, black pepper, and herbs (he uses fresh thyme and dried oregano), and drizzled with extra virgin olive oil. The combo is, quite frankly, dangerously good. I have made my own version of this dish many times at home, eliminating the milk (I like the texture to be a bit more rustic), playing...