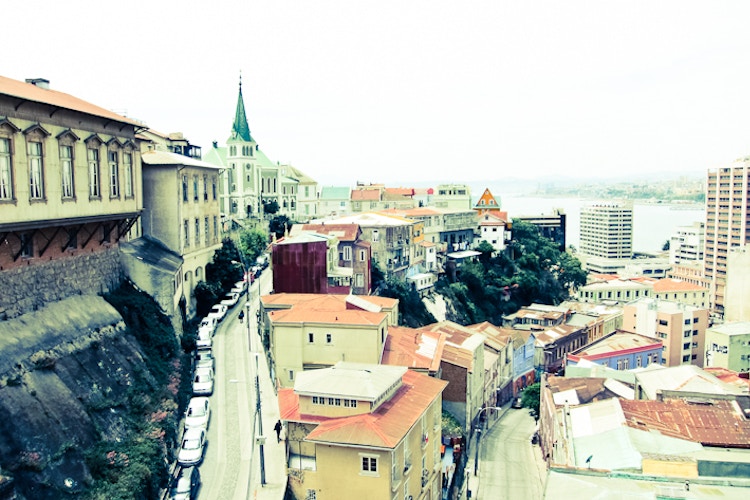 Happy New Year!! January usually feels like a bit of a letdown for me post-holidays, but frankly I could not be happier to be back home in New York City, and kicking off a New Year. 2012 was challenging to say the least, and I'm excited for a fresh start in 2013. After a week spent working on magazine deadlines, I had planned to write to write an inspirational beginning-of-the-year post today. Instead, I'm just going to tell a story.

Back in November, Brandon and I had the chance to spend 2 weeks in Chile. It was an amazing trip, and we crisscrossed the country, flying to Punta Arenas (Chile's southernmost city), driving and hiking our way around Patagonia, flying back up to Santiago for a few days, then driving through the beautiful vineyard-filled San Antonio and Casablanca Valleys. We ended our trip in the colorful–and chaotic–coastal town of Valparaiso. My friend Liz Caskey (who runs a fabulous boutique travel company out of Santiago) warned us that driving into Valparaiso would be tricky. She even drew us a detailed map on a slip of paper, highlighting the serpentine streets and hairpin turns that we would need to navigate. 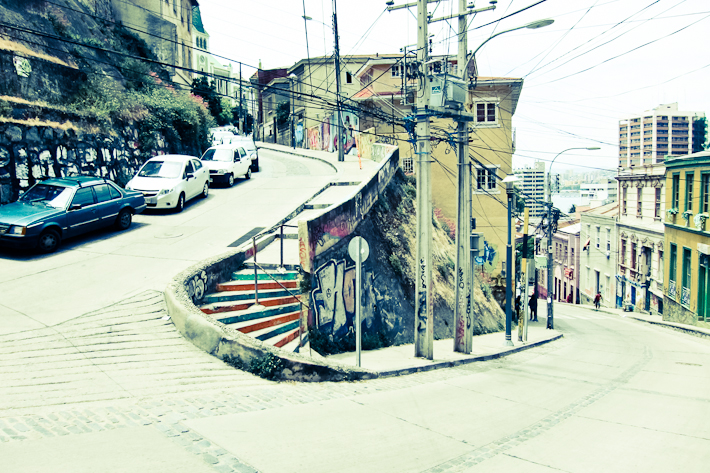 The map and the warnings were helpful, but there was no way we could be prepared for the harrowing experience that awaited us. First off, we were driving a stick-shift car, which is always tricky when navigating hills. Thankfully Brandon was driving, but that also meant I had to be the navigator (the cause of many an argument!). Second, in order to try and see where we were going, I had to simultaneously look at the hand-drawn map, my iPhone GPS map, and out the windows at actual street signs. Third, drivers in Valparaiso are not tolerant of cautious drivers. They will pass you, even on a hill. The navigating was going just fine until we turned away from the flat roads by the port, and began to weave up into the hills. The hills of Valparaiso–there are 42 of them, each with their own neighborhood–are so steep that the city has a system of elevators (funiculars) to take its residents up and down. Many roads that appear on the map are actually steep staircases, which are obviously not intended for cars. When we finally arrived at our hotel, we handed the keys over to the valet, and praised God that we had made it up the hill in one piece.

But once we had the car safely parked, the city was a marvel to explore. An odd assortment of houses, painted every color of the rainbow, were precariously stacked on top of each other reaching far into the hills. Ornate Victorian palaces, witness to Valparaiso's prosperous shipping days, sat in various conditions of disrepair, mixed in with hastily-built corrugated iron shanties. Stray dogs and cats wandered the streets, and agile senior citizens (often carrying heavy bags) navigated the alleyways and staircases with resolve. Music could be heard wafting out of windows, bougainvillea bloomed over iron gates, and glimpses of the sea could be seen between buildings. Valparaiso is a walker's paradise, and despite it's gritty appearances, the city is on the up-and-up, with new cafes, hotels, and galleries opening up all the time. 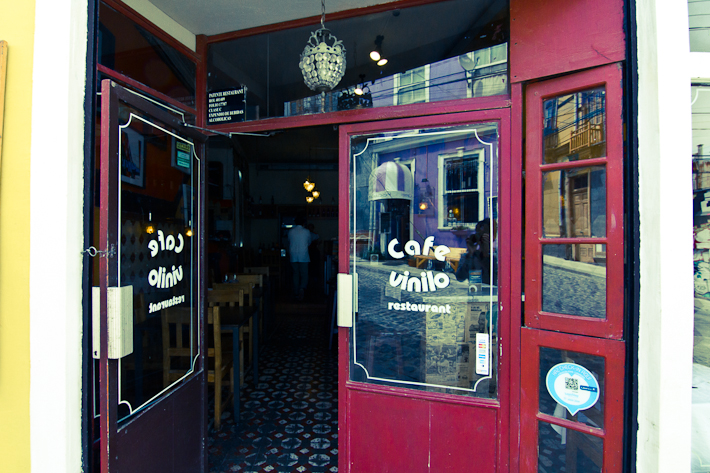 But that's not the story I want to share–that's just setting the stage. On our last day, Brandon and I were wandering around taking some pictures before we had to head back to the airport. We had eaten lunch the day before at a fantastic little spot in Cerro Alegre called Cafe Vinilo (named for its collection of vinyl records), run by Chef Gonzalo Lara. He makes traditional Chilean dishes from scratch, sourced locally from the port-side markets, and serves beer made by his brother. He also offers market cooking classes and popular "Anti-tours," where he takes tourists to his favorite off-the-beaten path spots in the city. He's is a total character and we had enjoyed chatting with him over lunch so much, that we stopped by the cafe again to say hi before we left town.

We didn't realize what a surprise we had in store. The restaurant wasn't actually open yet (it seems to open whenever he feels inspired) but Gonzalo welcomed us inside. He asked when we had to go to the airport and we said, oh, in an hour or so. He smiled and grabbed his keys and said: "Come with me."

Brandon and I glanced at each other and followed the chef to his car, parked right outside the restaurant. "I want to show you something," he said as he opened the car doors. We shrugged our shoulders and hopped in. Gonzalo started the car and screeched up the hill, smoke trailing from his tires. And we were off to the races. I quickly buckled up and held on for dear life. Gas pedal to the floor, he revved the engine, going as fast as a car heading straight up a mountain can possibly go. We whipped around S-shaped curves and continued going up and up and up and up. On every turn I held my breath, waiting for us to collide with another car or careen off a cliff. Apparently this is how the locals drive, I thought. We had no idea where we were going, but I prayed we would make it there alive. About 15 minutes later, we finally came to the end of the road, which stopped in a field high above the city. We got out of the car and gasped: the views were stunning. Brightly colored houses stretched as far as the eye could see, and a horse grazed in a field nearby. The bay of Valparaiso–and the Pacific Ocean beyond–shimmered below, and we breathed in the fresh, clean air. 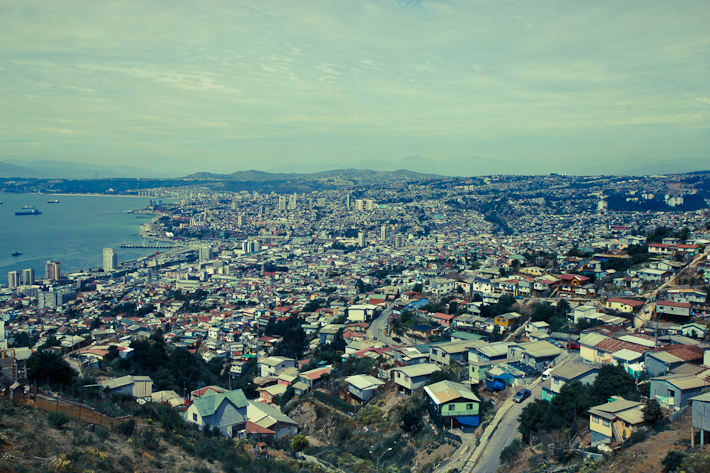 Gonzalo grinned as we snapped pictures and marveled at the view. "This is something that tourists don't get to see," he said with a smile. Clearly! As we stood there, with our birds-eye view of the city, it occurred to me that it's unexpected moments like these that really make life special. When it comes to travel, I'm a planner. I booked all the hotels for our trip, figured out flights and itineraries, and had a general idea of what we'd be doing each day we were away. But moments like these can't be planned. I love that Gonzalo took the time to invite us on an impromptu drive, and that we took the risk of saying yes. We could have easily said no, given that we had a flight to catch, and no idea when we got in the car where he was taking us or how long we'd be gone. God keeps teaching me to be open to the unexpected–and to keep life flexible enough for serendipity to occur. "Walk by faith, not by sight." That's my desire in 2013, to embrace the unexpected and to let go of fear. To be open to adventure and spontaneity, and to let God lead, even when I have no idea where we're headed. 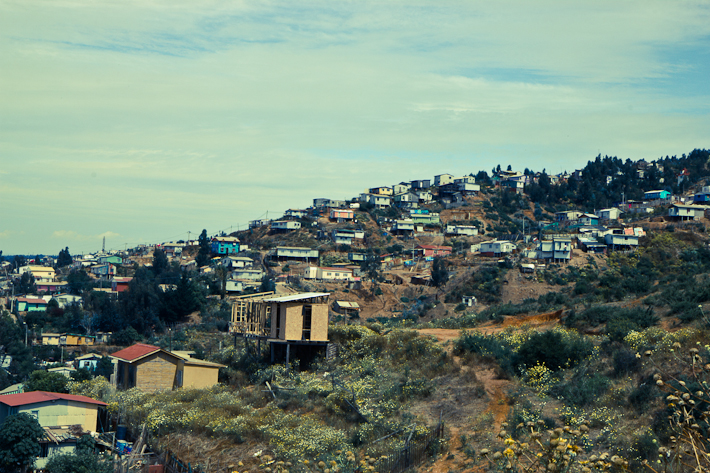 The drive downhill was much less frightening than the one up. Gonzalo drove more slowly and carefully, and we still got back to the restaurant with plenty of time to catch our flight. He insisted on giving me a Cafe Vinilo T-shirt, so I had to of course put it on for a picture. We headed back to the hotel to get our bags and as we headed to the airport, we laughed at our unexpected adventure. That afternoon is one I'll never forget. 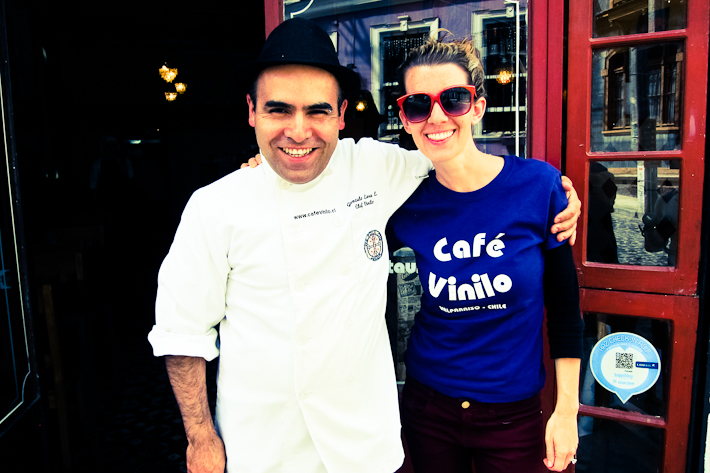 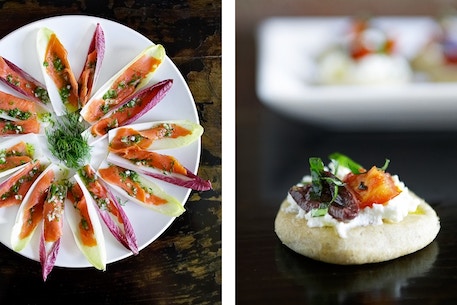 I hope you all had a wonderful holiday, with lots of great time with friends and family, in the kitchen and around the table. We spent a white Christmas in Michigan with Brandon's family, with more snow on the way! Now that the presents have been opened, the big Christmas dinner cooked and eaten, and Elf watched (for the umpteenth time!), my thoughts are moving ahead to the New Year. This December was heavier than most, for a myriad of reasons, and frankly I'm ready to welcome in a new year... 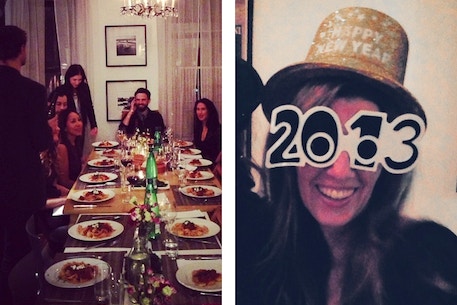 Kicking off a New Year around the Yellow Table

I'm not exactly sure how it's already February and I'm just now posting pictures from our New Year's Eve dinner party! Somehow the year has gotten off to a busier start than I could have imagined, between writing assignments, travel, recipe testing, and cooking for various events. I just got back from a wonderful week in Nashville visiting family, but I hate that the blog has gotten a bit neglected in the process – I am vowing this month to get back into a regular post schedule! New Year's Eve...